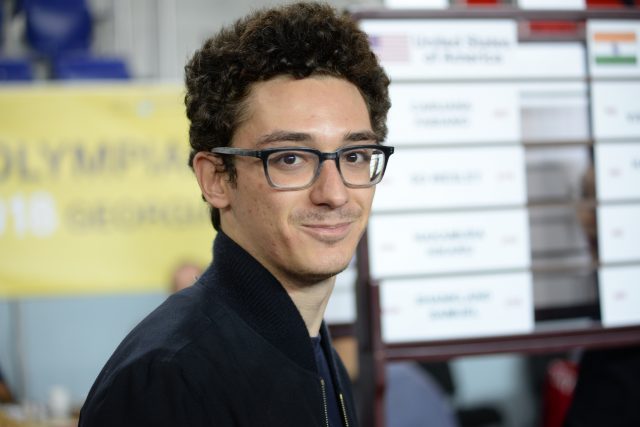 Fabiano Caruana, the hero of the US-India match, Photo David Llada
Round four of the Olympiad in Batumi was an extremely exciting and ultimately triumphant day. https://twitter.com/ChessMike/status/1045399912890986498 Besides the strong pairings for our teams, top-level matches in the Open included Russia vs. Poland, Azerbaijan vs. England, and China vs. Croatia. In the women’s: China vs. Uzbekistan, Italy vs. Armenia, India vs. Poland. The women’s match against Azerbaijan was as close as it gets on rating average. USA fielded a 2371 team, facing off against Azerbaijan’s 2369. Team USA brought experience in their first three boards with Zatonskih, Krush, Abrahamyan and youth with Yu on board four. The games were extremely hard fought. The first game to finish was the close encounter of Jennifer Yu vs. Gulnar Mammadova. Preparation expected a Dutch set-up from the Azerbaijani, but not exactly the move-order or structure that she chose. Jennifer tried to adapt, but was unable to gain something tangible. After more than three hours of play, in the resulting endgame, her opponent consulted with her team captain to offer a draw, which she did, and Jennifer consulted her own team captain as to whether accept or decline. A vigorously shake of hands by captain Melikset Khachiyan indicated her to play on, despite the drawish tendency of the position and Jennifer’s low time. The reason was that while at this moment Irina was winning on board two, Tatev’s position was extremely unclear and could go either way. As soon as Tatev was headed towards a draw, the draw was now a favorable result on board four and Yu’s offer was accepted. Second to finish was Irina Krush, who played a superb game. Her opponent, Zeinab Mamedjarova, the oldest of the Mamedyarov siblings, played a dubious opening line of the Queen’s Gambit Declined, exchange variation, and was duly punished. These are the type of positions that our six-time U.S. Women’s Champion thrives in! Her opponent never found counterplay, and was nothing but a collection of weaknesses. Mamedjarova’s position collapsed eventually. USA 1.5-0.5 Azerbaijan. Tatev Abrahamyan had an absolutely crazy game against Khanim Bajalyeva. Such is the nature of the poisoned pawn variation of the Winawer French! White had no development, but the h-pawn was always a threat, and she had the material advantage. Tatev missed a computer-like win right after the opening, but in the complications White also missed a strong move after the complications simplified into a dangerous endgame for black. Tatev seemed to have the draw in hand (it was at this point that Jennifer herself drew), but a big blunder closing in on move 40 and in strong time pressure gave away the full point. Perhaps underestimating her opponent’s attack, she was forced into a terrible queen endgame down a pawn, which was not only objectively winning, but also practically impossible to defend even if it wasn’t: White had a safe king and black always had to be worried about potential queen trades. 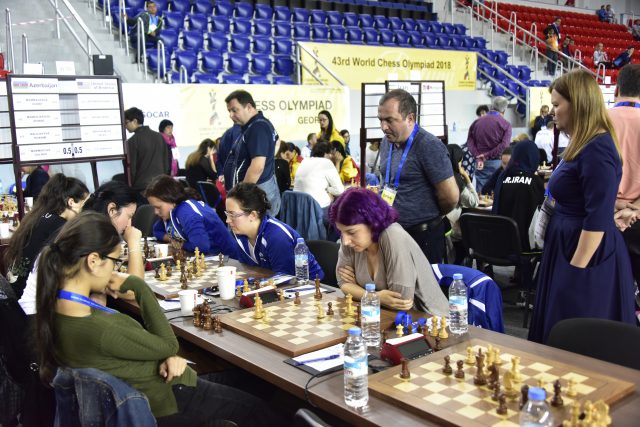 The US Women's team in round four, Photo David Llada
The match came down to the duel of the first board: experienced Anna Zatonskih with black against the rising star of Azerbaijan: Gunay Mammadzada, only 18 years old. What a titanic struggle this game was! Their bright star played a great game at the beginning, simplifying into a very slightly better endgame. However, Anna’s experience shone through, slowly outplaying her opponent. Things move by move became better and better for Anna, until she got an advantage which turned into a pawn. The game was still very far from over, her opponent playing great defense and the amount of pawns was so reduced that the possibility of reaching a rook and knight vs rook endgame, which is theoretically drawn, was extremely high. Anna kept fighting like a lion, both players coming down to below a minute plus increment for many, many moves. Despite the tenacious defense by the teenager, almost achieving a draw, she cracked, blundered and Anna had a forced win. However in deep time trouble Anna missed it, finally being forced to play rook and knight vs. rook. Of course, you always play this position on, until the very end, especially in a team tournament! The end of the game was incredibly tense; almost the entire room was clear of players by this point, and it was one of the few games still standing. It was enough to gather a bit of a crowd, and the tension was simply palpable. Anna played calm and collected, gracefully playing every move. Her opponent also played with peace, but the shake in her hands gave away her nervousness. And then, she cracked again. Not far after going into the R + N vs R endgame, the Azeri player went to the wrong side of the board and checkmated herself, giving Anna and American the round victory. A simply amazing display by Anna! The women face Mongolia tomorrow. In the open section, all eyes were on our matchup against India. Even though we weren’t playing board one, it was quite easy to take a picture and observe the board one pairing of Vietnam vs. France, but between spectators and photographers it was difficult to approach our match! America’s players with the black pieces both essayed the Berlin defense. Shankland’s opponent on board four, Krishnan Sasikiran, went for the known Berlin endgame. Using a relatively rare line of b3, he got Shankland seemingly out of prep early, but the knowledge of the structures by the U.S. Champion allowed him to equalize easily, and White repeated moves before his position turned south. Wesley So faced against Pentala Harikrishna, but the Indian player simply had no opportunity for an advantage in the anti-Berlin. Playing an extremely solid and precise game, both players reached an endgame in which nothing could really be done. The draw was a natural result and the 1-1 favored USA as both of our white boards were pressing against their opponents. Hikaru Nakamura’s Ragozin put Vidit Gujrathi under some pressure, but the Indian defended with tenacity. Nakamura kept posing problems with his slightly better position, but perhaps his 32nd move was a slight inaccuracy that allowed Black to equalize. This was relevant to tiebreaks, but not for the match result, since by this time Caruana had already finished his game. The game of the day, without a doubt, was Fabiano Caruana’s destruction of 5-time World Champion Viswanathan Anand: USA remains perfect. The team will surely going to face 2700+ teams in the coming rounds, but they have at least taken out one of their competitors! Tomorrow the USA will face Israel in the Open section. Grandmaster Maurice Ashley started vlogging for US Chess! Check out his vlogs on our social media networks, instagram and twitter. https://twitter.com/USChess/status/1045114264715972609 The Olympiad takes place from September 24-October 5 in Batumi, Georgia with rounds everyday at 7 a.m. ET (except for September 29, the rest day). Find more photos and information on the official website, as well as live games in the Open and Women’s sections.
SHARE: