Alejandro on the Race for Medals in Greece

GM Alejandro Ramirez reports on the progress of Team USA in Porto Carras, Greece as the medal race intensifies. 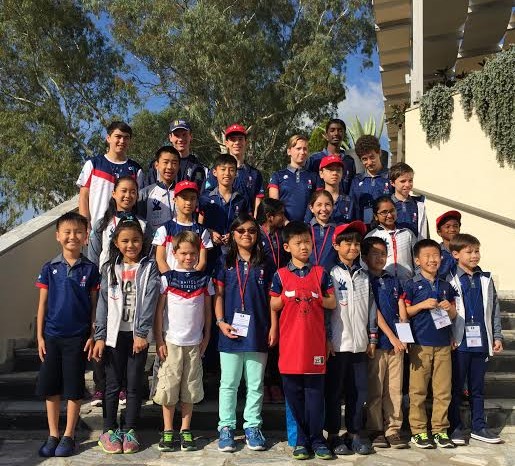 Round nine has just finished here at the World Youth in Greece, and it is a good time to look back at what has gone right, what needs to be changed, and how the USA delegation is doing as we approach the final two rounds of the tournament.
Let me start by saying that the tournament organization has been, at least from my viewpoint, extremely satisfactory. For such a large tournament, everything is smooth: the pairings come out quickly, the rounds start on time and without hassles, and most playing conditions are good – the few that have received complaints have been fixed.
From our own camp things have also run smoothly. Co-heads of delegation Aviv Friedman and Mikhail Khodarkovsky have managed to take care of even the smallest problems that have affected our players.
Our hotel, Sithonia at Porto Carras is a nice place to stay in. The walk to the playing hall is only a few minutes, and you have the option of going the quick way by taking a few roads, or taking the scenic route by the beach. Even though we are far from summer temperatures, a few people seem to enjoy going for a swim in the ocean. The food options are starting to get repetitive, but that is to be expected on a stay that is over two weeks long: the food is after all rather tasty, even if the variety isn't amazing. The internet isn't the strongest in the hotel during peak hours, but it is sufficient (to send this report for instance).
The rest day was scheduled after only five rounds. The players and parents did a variety of things. Some went to the nearest major city, Thessaloniki, while others were more adventurous and took a long bus ride all the way to legendary Mount Olympus. Most of us, however, decided to simply explore the area around the hotel. For 2.50 euros a nice ferry takes you to the nearest village, called Neos Marmaras, a picturesque town with souvenir shops, excellent restaurants and cafes, and most importantly a change of scenery.
The rounds after the rest day are quite decisive. They weed out the players that will have real chances for medals, and in general set the pace for how the tournament will unfold. After nine rounds we have had some major ups and downs, some big disappointments but also some lucky breaks. 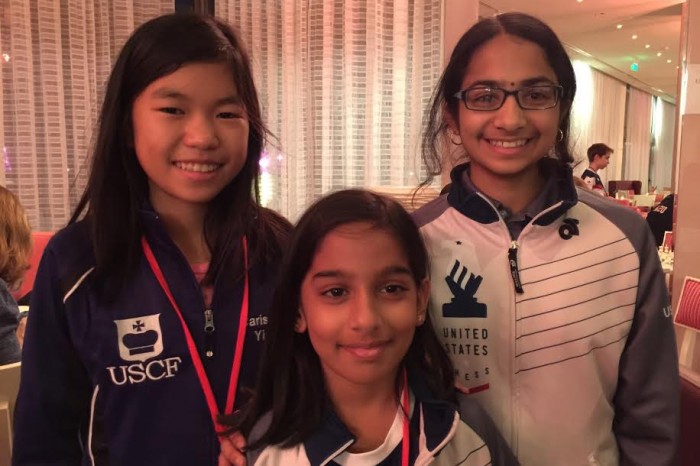 Carissa Yip, Maya Behura and Sanjana Vittal sporting Two Sigma uniforms at the World Youth
Starting with the girls sections, we are currently having a very strong showing in the u12. Despite losing a heart breaker on round seven, Carissa Yip is still in excellent medal contention, with 7.5/9 and currently in second place in the tournament. She recovered from her loss nicely with the following win:
Also with good medal chances and with 7.0/9 is Martha Samadashvili. She is in a do-or-die situation tomorrow if she wants to reach the podium, as she faces Saina Salonika from Indian, one of the girls that has 0.5 points more than her.
In the u16 girls, Agata Bykovtsev is our best chance. She has not drawn a single game, and is currently on a three-game winning streak after defeating Qiyu Zhou from Canada, the reigning u14 World Champion. Agata has 7.0/9 and two wins in the final two rounds might even give her a gold medal.
Not all of the players that have had a strong showing for us are necessarily in medal contention. For example, Alice Dong in the u18 section started ranked 61/80, but after winning her last three games in a row she is ranked 24th and is winning a massive 141,6 rating points. A win against the top seed tomorrow will give her a WIM norm.
The u8 open section has several players showing excellent chess. My own student, Aghilan Nachiappan, started with a dashing 6.5/8. Unfortunately he had to learn his lesson about king activity in the endgame the hard way today, and now sits in a still very strong 6.5/9. Also on this score are Americans Lucas Foerster-Yialamas, Adi Murgescu and Surya Vishnu Vanapallii. In an unusual pairing, the Americans will be playing each other, which is unfortunate, but at least our chances of having two people with 7.5/10 is rather high!
The u10 suffered a significant setback for us today. Justin Wang has had a fantastic tournament, and today he had the tournament in his hands as he was crushing the top seed in his section. Unfortunately a big blunder not only cost him the advantage, but the game, and although Justin still has good medal chances, he will have to recover psychologically from the loss.
The u12 is where some of our best medal chances lie. Andrew Hong is currently tied for the lead with 7.5/9, and close behind him are David Peng and Hans Neimann with 7.0/9. Tomorrow will be a crucial round for our players in this section. Andrew could even have had better chances had he found the killer blow in his game against top seed Abdusattorov:
The tournament has been long. Many important lessons have been learned, and many great experiences have been had. We gear up here in camp USA, in the Purple Bar of the Sithonia Hotel in Porto Carras, as we try to bring home the medals.
You can find out more about the tournament on the official website, where you can find live games and also follow along on chessresults.com.
The World Youth squad is sponsored by Two Sigma. Read more about the uniforms Two Sigma is generously providing our delegation with, in the announcement and arrival PR.
SHARE: