Alejandro on Americans in Iceland

The Reykjavik Open is one of the best tournaments in the World, no doubt about that. Held every year in the capital of Iceland, this open has obtained the reputation of being not only one of the strongest events of the year, but also one of the friendliest and with the best environment to play in. Iceland itself is an absolutely beautiful country, with amazing sights, waterfalls, geysers and enough touristic attractions to last several weeks. Indeed, Reykjavik attracts many tourists – up to 1.5 million per year, which is almost five times the population of the entire country! The tournament is held in the Harpa concert hall, a beautiful and spectacular building which oversees the bay. When it is sunny, it is possible to see a wonderful view of the surrounding glaciers and snowed in mountains around Reykjavik. In the windy days, you can see (and hear!) the snowstorms from inside the hall, while sipping on some hot chocolate and playing your game. 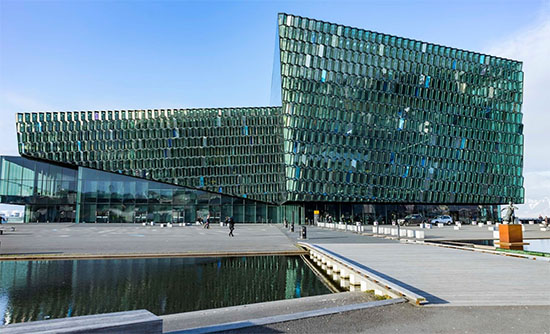 Photo Lennart Ootes, Official website
With “only” one round a day, the event gives enough time for players to walk and explore Reykjavik, and sometimes even attend certain tourist expeditions. There are a slew of side events, which include soccer, a pub quiz, blitz events, tours to waterfalls and geysers, and even a backgammon tournament! That tournament is certainly amazing as a half tourist, half tournament destination, but if one wants to take the event seriously, it is also one of the strongest events of the year. The starting list saw some incredibly strong players at the top: Shakhriyar Mamedyarov, Dmitry Andreikin, Richard Rapport, Gabriel Sargissian, Ivan Cheparinov, only to name a few. For this reason, many Americans attended the tournament, to face against some of the best players in the World. Some did it seeking norms, others did it for fun, while we even had two people do it as preparation for the upcoming U.S. Championship! 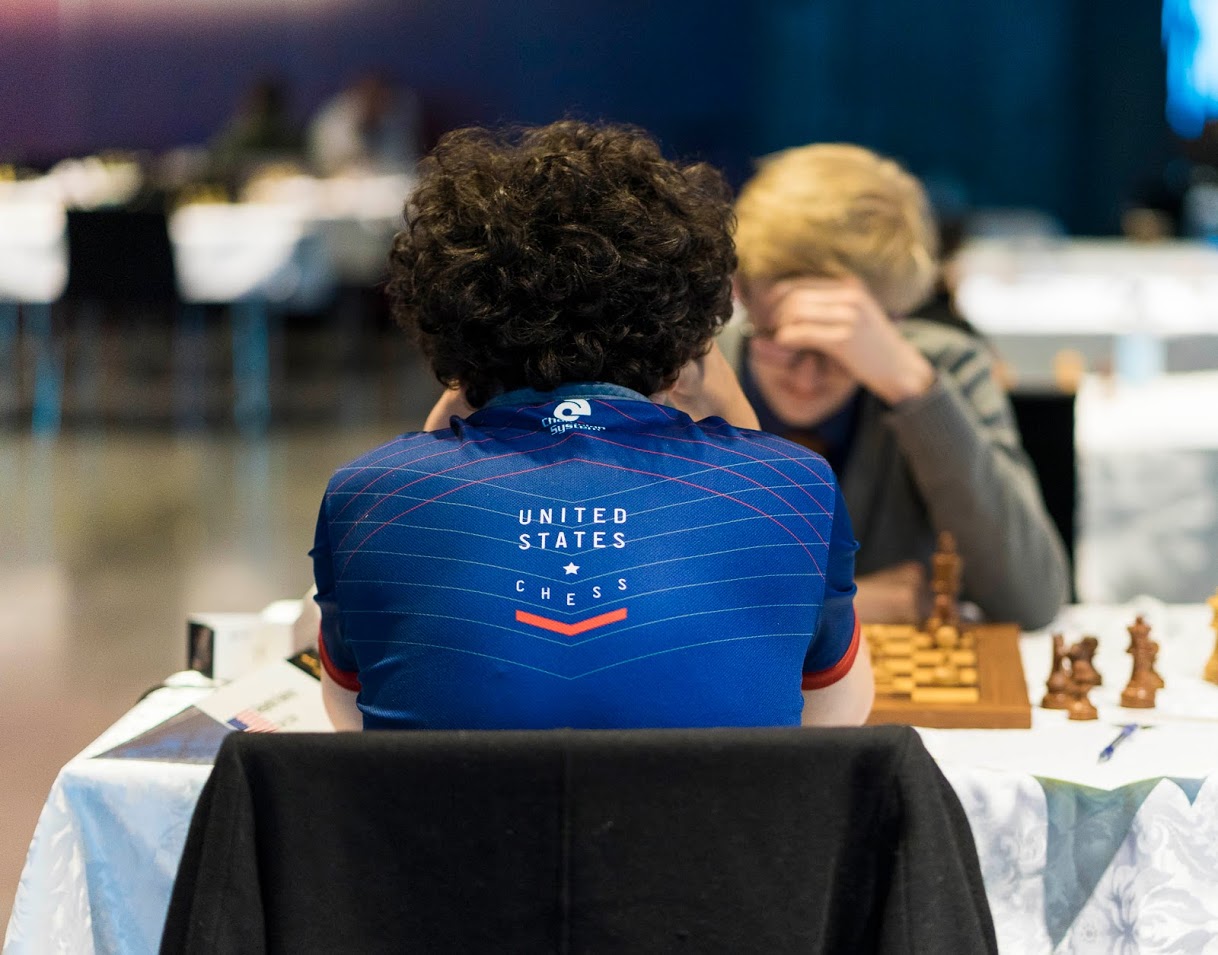 You can find more information on the tournament on the official website or on the reports at www.chesssbase.com, but here I would like to focus on the performance of the Americans that went to Iceland. Fourteen players participated in the Reykjavik Open under the American flag. I am unfortunately not familiar with a few, and since they didn't make it to the DGT boards it is hard to report on their performance, but I hope that Walter Driscoll, Christopher Baumgartner, Lawrence Cohen, Michael Murray, Tom Riccardi and Robert Fischer (!) had a great time in Reykjavik! 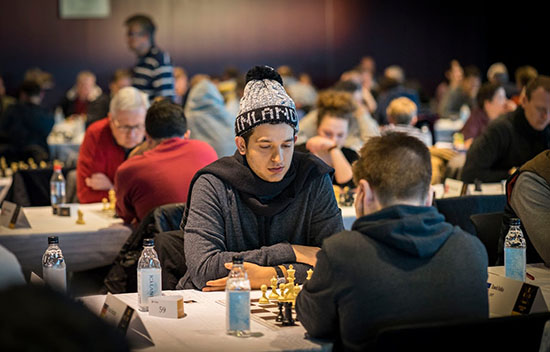 Peter Giannatos, Photo Lennart Ootes for official website
Peter Giannatos is the person in charge of the Charlotte Chess Club, a venture that is definitely picking up steam and that has GM Ben Finegold overlooking the upbringing of new chess players in the area quite consistently. Trying to get a taste of European chess, Peter traveled not only to this tournament but also to the rapid tournament in Riga which preceded the Reykjavik Open. Not only did Peter get a good taste for international chess, but he also won a whopping 30 rating points! That is not a small feat, by any means. 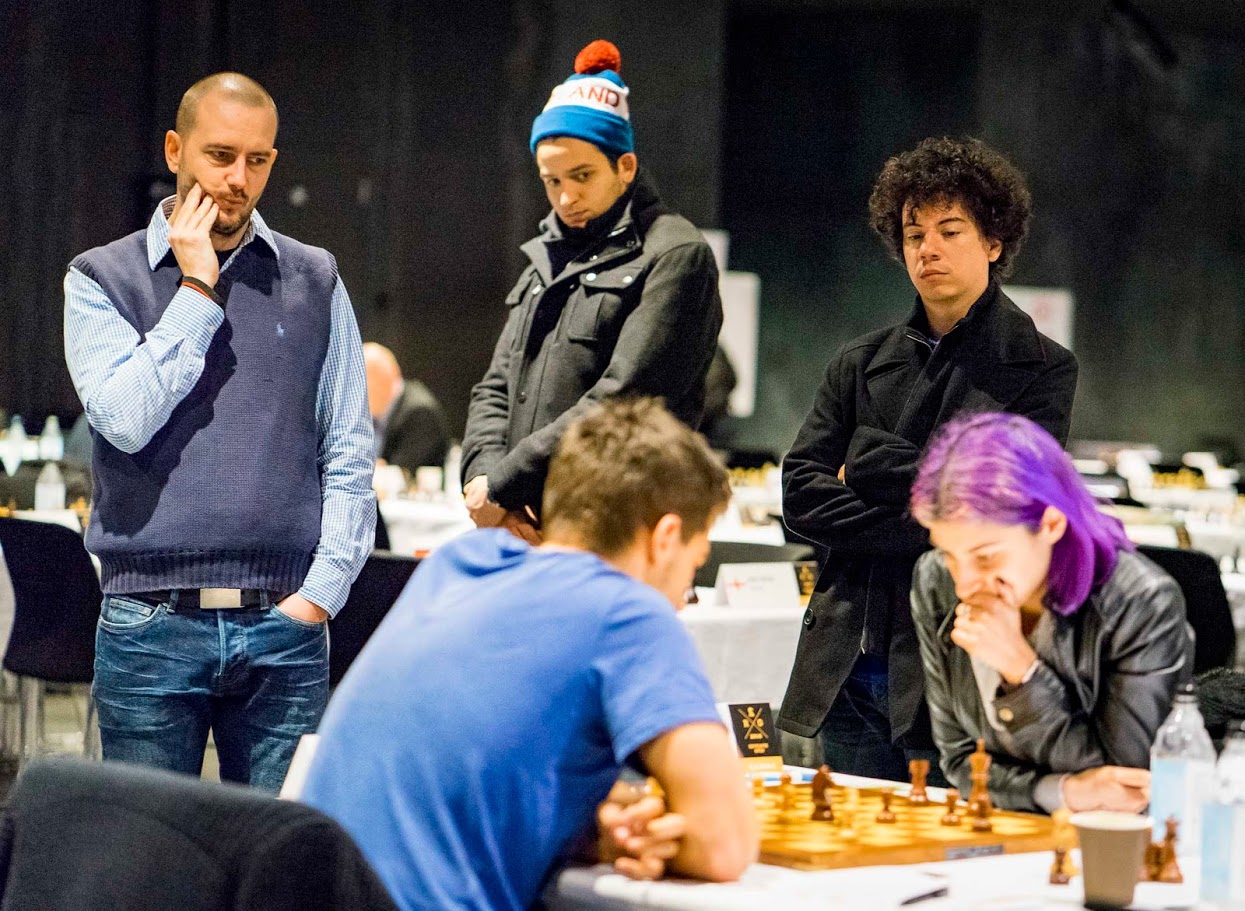 Peter Giannatos (Finnish hat) and this author overlooking Tatev's superior position against a 2600 GM. Photo Lennart Ootes for official website
Following in rating order, Tatev Abrahamyan is one of the participants in the upcoming U.S. Women's Championship. After a rocky year, it seems that Tatev has finally found some stable ground. Her performance in Reykjavik was superb, winning 22 rating points and playing against some very high rated opponents. She was winning in several of her games, including against near 2600 GM Danyyil Dvirnyy, but her cleanest performance was in the last round against Italian WGM Maria Brunello: 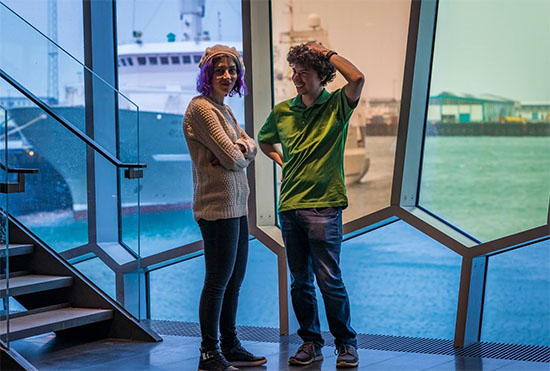 Tatev and Alejandro, Photo Lennart Ootes for official website
Konstantin Kavutskiy has been a friendly face in tournaments all around America, and it is good to see him try his luck in European events. In fact, he made a small tour around Europe trying to search for his IM norms, but was always a bit shy of actually obtaining them. His performance in Reykjavik was ok, but he ended up losing just a few rating points in the end. 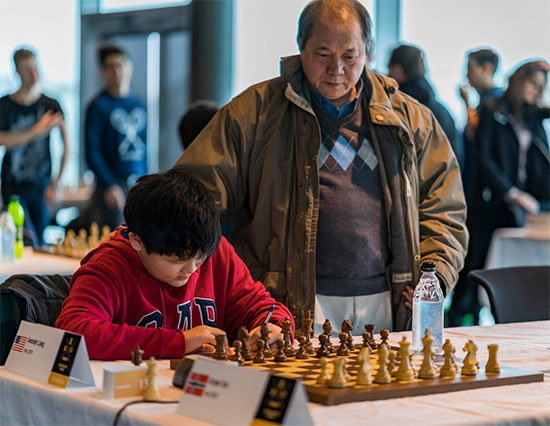 Awonder Liang, Photo Lennart Ootes for official website
Now come a string of success stories, starting with Awonder Liang Young Awonder went with his father, and had a very solid performance. He was only defeated twice, once by the tournament winner, Abhijeet Gupta and once by super-GM Sergei Movsesian. I chose his game against Gupta to annotate and show, because I think it was one of the key games of the tournament (not just for Awonder, but as a whole) and because it was such a learning experience. But with a 2445 rating performance, a win over GM Henrik Danielsen and drawing two 2500s, the tournament was certainly a success for this young prodigy. Justin Sarkar also had a brilliant showing in Reykjavik. Despite his slow start with 1.5/2, he bounced back in an incredible way. He lost to Mamedyarov in round four, but he won three straight after that, including a win against Danyyil Dvirnyy. After losing to Sargissian in round eight he bounced back yet again with a strong win against GM Hannes Stefansson. A win in the last round would have given Justin a GM norm, but he lost to the talent Aryan Tari and will have to be content with taking home 12 rating points. Not bad at all! Another excellent performance was done by Marc Esserman. Seeking his GM title, Marc was definitely on fire in Iceland. He played against five grandmasters, including 2700 prodigy Richard Rapport and veteran Alexander Beliavsky, and only dropped a full point against Sergey Grigoriants from Russia. Marc was certainly en route to a GM norm and showed excellent chess. His game against Rapport was certainly hard for me to understand, but seemed to be in style for both of these players! 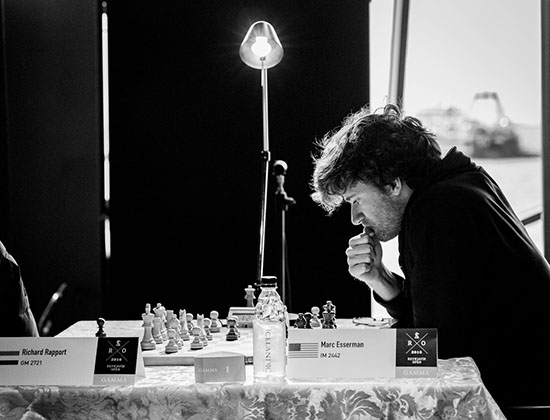 Marc Esserman, Photo Lennart Ootes for official site
Alexander Shabalov used this opportunity to practice for the upcoming U.S. Championship. He had a good showing, and had several strong grandmasters against the ropes. He won some rating and overall had a good tournament, but I think he will want to do even better in the U.S. Championship. It seemed to me as if he wasn't showing his real openings, saving them for the upcoming event in April, but even then he managed to obtain near winning positions against Cheparinov and Agdestein. 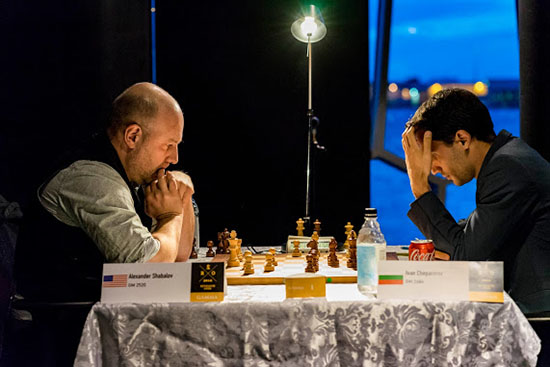 Shabalov vs. Cheparinov, Photo Lennart Ootes
Last but probably not least is myself. I entered the tournament as the highest rated American, and ended up scoring as many points as Shabalov and Esserman, but lost one rating point. I had a great time in Reykjavik, and my tournament was going well after the fifth round when I drew super-GM Gabriel Sargissian with black, but after losing to Tania Sachdev (who was absolutely on fire, scoring a GM norm and winning best woman's prize), I had trouble bouncing back. 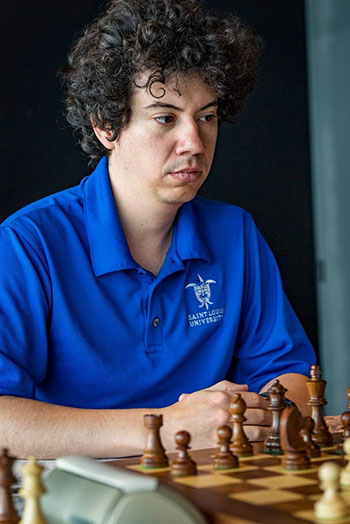 GM Alejandro Ramirez, Photo Lennart Ootes
The trip also served for me as a recruitment center for potential Saint Louis University students. SLU will be starting with its elite chess program this Fall, one of the participants of this event will be joining as us a student this year! Overall I cannot recommend participating in the Reykjavik Open enough. The tournament is, for European standards, a stone throw away from New York, it is extremely friendly and very strong. I hope that more Americans show up to Iceland next year, and that we have as strong of a showing as we did this year! GM Alejandro Ramirez is currently one of the hosts of"> Today in Chess, filmed at the STL Chess Club.
SHARE: