Andy Woodward: A Quest For My IM Title 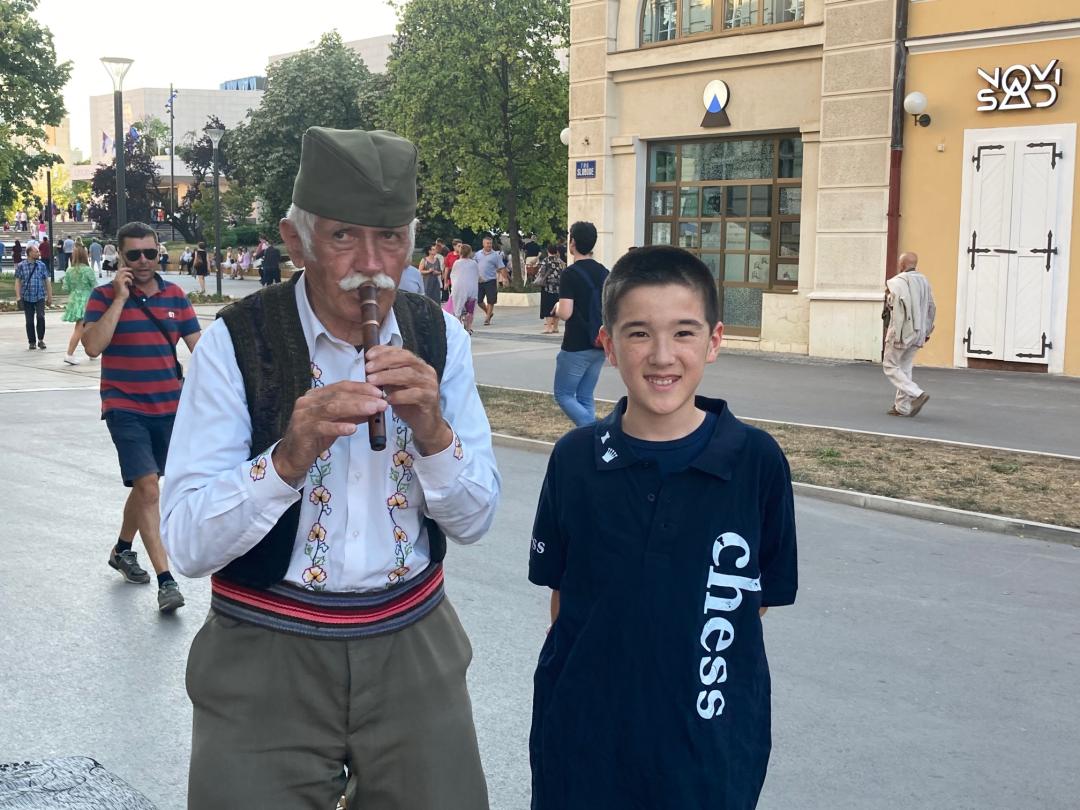 You may have seen Andy’s interview, as well as his stunning victory against IM Kostya Kavutskiy, in the November issue of Chess Life. Here, he shares some details from his summer vacation in Serbia, where he got his first two IM norms. Since then, he has gotten his final IM norm and, at the end of October, his first GM Norm at the 1000 GM Hollywood Masters. Look for a brief story here on Chess Life Online by IM Keaton Kierwa that features a key game from this recent norm-hunting success. – Ed.

Summertime is a great time for chess players. With many big tournaments to play, there are plenty of opportunities to gain some rating or reach other chess goals. I became a FM (Fide Master) last summer after I played in the National Open and the World Open. Since then, I set my next goal to become an IM by the end of this past summer.

If becoming a FM was like getting across a creek by laying some rocks and skipping over them, then becoming an IM is like going across a river by building a bridge from scratch. It requires more hard work from both me and my family. With my parents' (as well as my sister’s) sacrificial support, I managed to travel once a month during the school year, trying to get closer to the IM title. 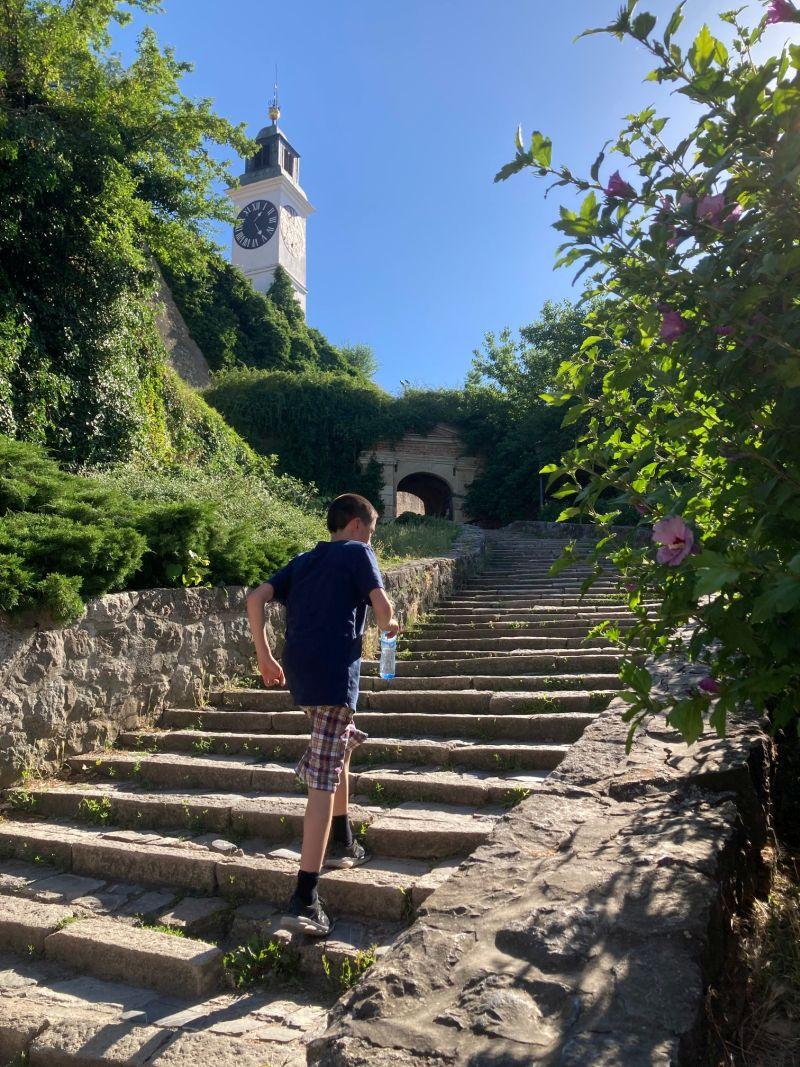 I got one norm from the North America U20 open tournament but missed several chances by a half-point. I still needed two more norms by May of this year. Because there were no RR norm tournaments that we knew of in the United States from late May to late July, my parents grabbed the chance for me to play four consecutive GM norm tournaments in Novi Sad, Serbia. I was super excited about the opportunity, especially to play in the GM sections that I had never played before. 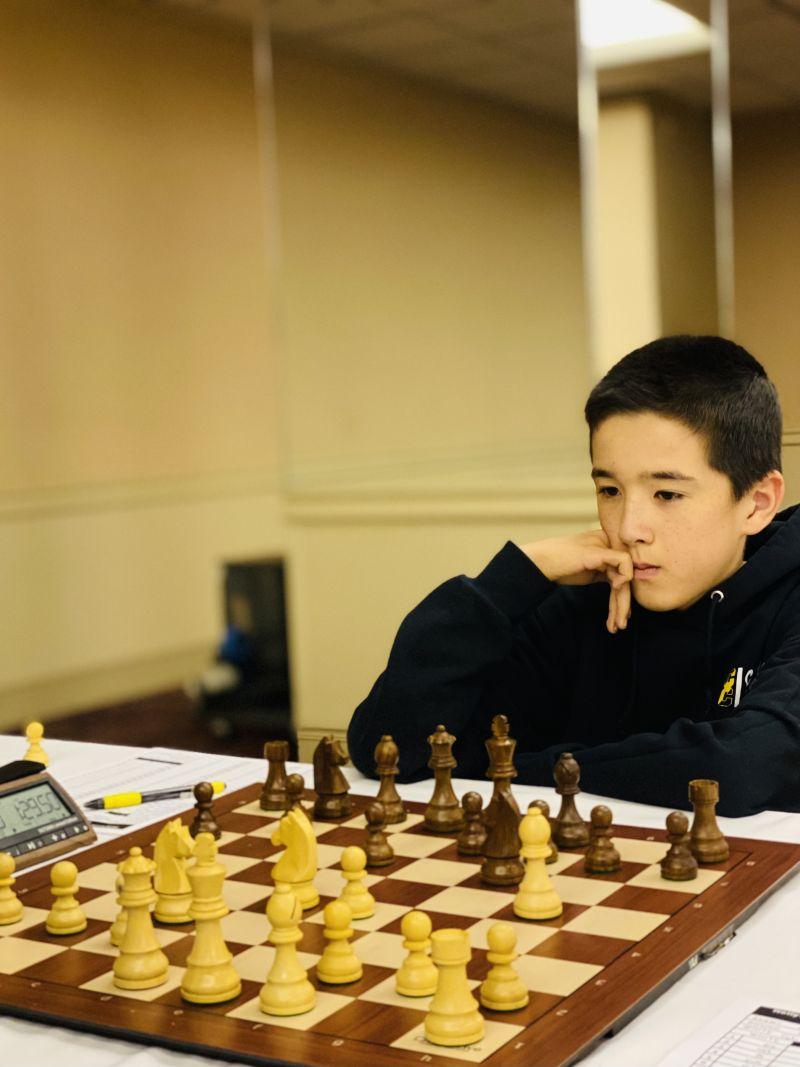 Serbia is a paradise for a chess player because there are so many grandmasters and so many strong chess tournaments. People from all over the world come here to play chess. We arrived in Serbia exhausted on a beautiful Sunday afternoon after over 17 hours of travel. Neither my mom nor I slept more than a couple of hours on the planes. Half of our fatigue was gone when the immigration officer welcomed us after he knew we were there for chess tournaments. The organizer sent a taxi to take us from the airport to the tournament hotel.

I was immediately captured by the natural beauty on the way from Belgrade to Novi Sad: vast rolling hills were dotted with colorful cottage buildings, church steeples, and tidy orchards. The hotel was in the center of the old city on the west bank of the Danube River, which I just learned about in my World Culture and Mapping class last semester. There were many good restaurants and ATM machines nearby. We had our first Serbian meal in a restaurant across the street. Both my mom and I loved our dishes. 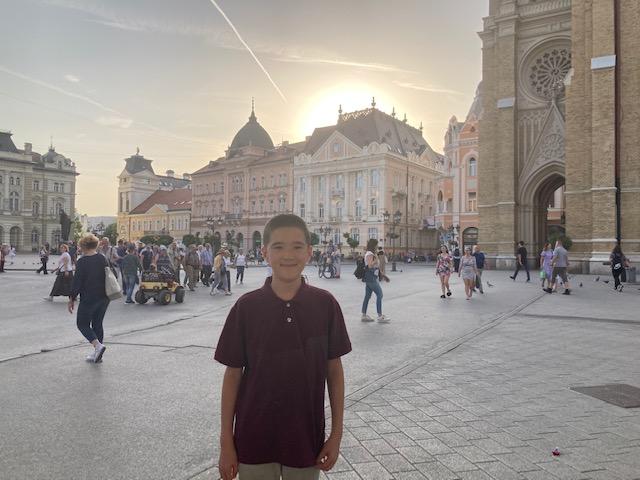 The tournament’s city, Novi Sad, was a lively tourist city named as the European Capital of Culture. Many top chess players have played here before, and our tournament hotel Putnik was right in the center of the city surrounded by beautiful squares, tall cathedrals, colorful buildings, lively outdoor sitting areas, high-end restaurants, and pebbled streets. There were lots of festivals, activities, and sports games while we were there.

Between all of these lively events and even noisier construction, we moved six times in four weeks between the hotel and various apartments just to find a quiet place to sleep at night. By the end of the second tournament, I felt sick. The TD told me to eat more fresh vegetable and fruits and get lots of exercise and sunshine. We moved from the hotel to fully furnished apartments four times so that my mom could cook. My mom was delighted to find a local farmers market just five minutes away. After this, I had lots of fresh vegetables and fruits to eat every day, and my energy bounced back quickly. 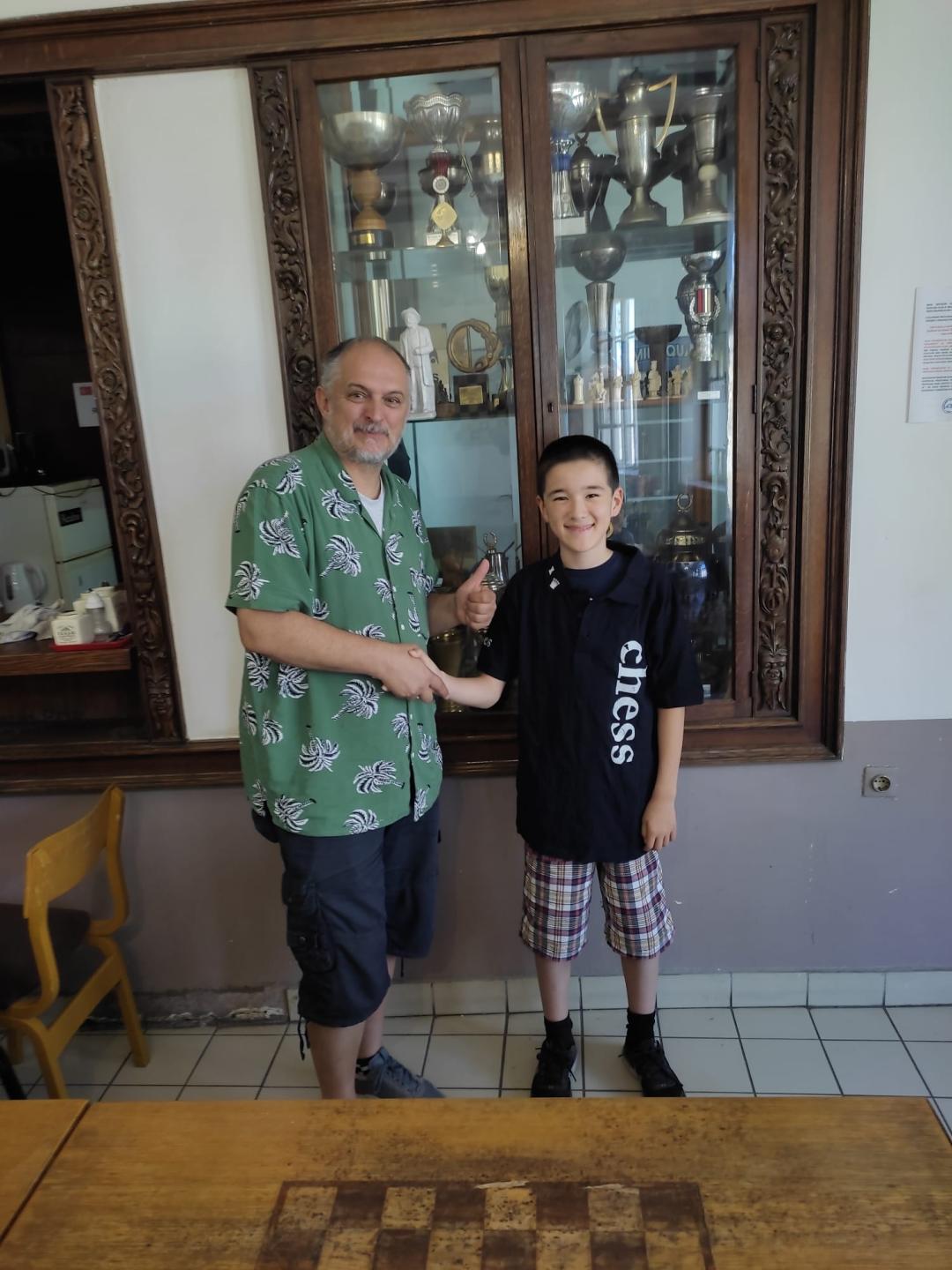 My first game was on the day right after we arrived. My mom had more jet lag than I did. We regretted not coming here earlier to battle the jet lag. On top of that, we were told that the GM norm section that I registered for was canceled so I had to play in the IM section as the second seed. This meant I would have to get at least seven points to get an IM norm. But I remembered the donkey story that my mom told me before: when life throws dirt at you, shake it off and step up!

My mom worried that the next three tournaments would be canceled too. Luckily the organizer reassured us that we would have three more tournaments to play! They just didn't publish the player list until right before the tournaments. I didn't start well: drawing my first game to a lower-rated player and losing to a very under-rated player from India second round.

My mom thought I would blow these tournaments with so many under-rated players from India and Georgia. She told me to "just use this tournament as a practice". But I said "I want to come back!" So I did: for the next seven games, I won six and drew one. This meant I earned my second IM norm! 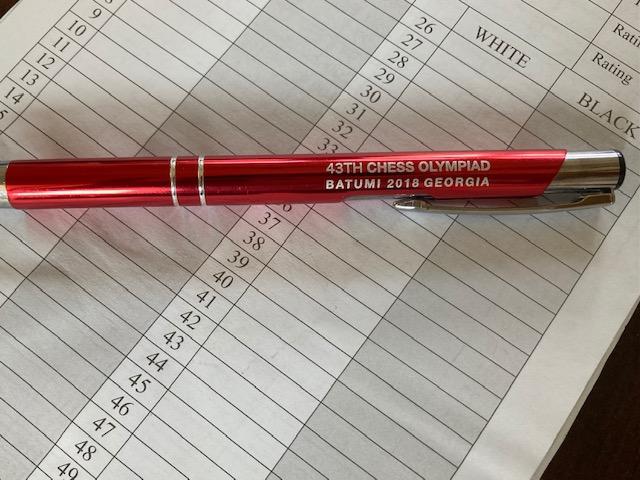 Image Caption
A gift from the TD: Magnus's pen from 2018

There was only one day between each tournament. I didn't start well for the second tournament again: same ½ out of 2. But I had the same mentality as my first tournament: I wanted to come back! This time I only needed 5.5 points to get an IM norm thanks to the higher average ratings of my opponents. As a result, I secured my final IM norm and the title with one round to spare!

The TD persuaded me and my mom to visit their 100-year-old local chess club and play a rapid tournament the day before the last round. Their chess club is in the downtown area at a very old building. It has some kind of tournaments every week from Friday to Sunday with a lot more adults than kids. That was quite different from home. 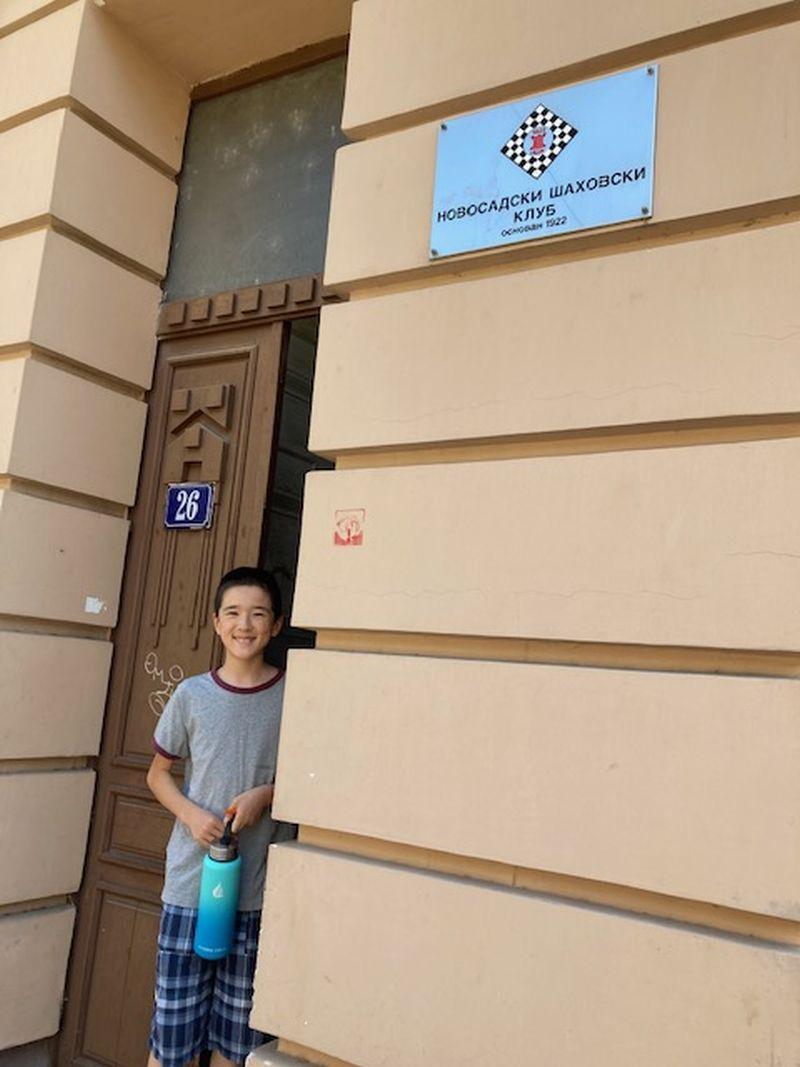 I often heard that once you don’t need a norm anymore, they just keep coming. Indeed, I finished my trip with four IM norms. Some people think that it is easier to get a norm in Serbia, but I didn't have that mindset so I fought hard. Some lower rated Serbian GMs are very underrated because they've been playing non-stop and drawing with lower rated players in the IM sections. But they are very experienced and extremely hard to prepare against and have rock-solid defensive skills.

All of these tournaments were played over six or more days, so they were not as physically draining as the ones in America that typically take only five days. Another difference was that the pairings usually didn't come out until the starting day of the tournaments. People couldn't do deep preparations in advance, but this favored me since I don't like to prepare. Besides, most of time I was surprised by my opponents’ opening choices anyways.

I did miss playing along with my chess friends. This lonely environment forced me to focus more on my own games though. I was fortunate to play against some strong players from all over the world: India, Serbia, Israel, Georgia, Greece, Costa Rica, Bulgaria, Ukraine, Germany, China, Kyrgyzstan, America and Russia. Below are a few of interesting games that we played:

I had heard about how relaxing and casual the European tournaments were, and I agree with this assessment. During the four weeks I was there, I arrived at the tournament rooms at the wrong time three times because of changes to the time or location. We finally learned to check the playing schedule before each round.

During the last tournament, when the pairings only came out two hours before the first round, we found out our section was divided into two sections and the tournament format was changed from a Swiss to a Round Robin! One day, everyone was asked to stop the clock to eat a Birthday cake. Another day, during our last round, the meeting room next door had a banquet with loud drums. I learned to go with it and relax a bit. Chess is more fun with some twists and turns!

By the time we were leaving Serbia, there were already three more strong tournaments coming up: Silver Lake A, Serbia Open and the Paracin Open. I wish I could have played in all of these strong tournaments, but I was ready to go home where my family and friends are. I was so blessed to meet my goal for the trip, thanks to the sacrifice from my family and to the support of my coach. All glory to God (May I borrow from you, Tani?)!

My next goal will be the GM title. It will be another different level of commitment and training. But I think it’s achievable if I don’t quit. I’d like to share my favorite Bible verse, Galatians 6:9, for those in the middle of a chess journey like me. “Let us not become weary in doing good, for at the proper time we will reap a harvest if we do not give up.”

What a grandson the LORD…

What a grandson the LORD blessed me with. So very proud of you ANDY. Always keep the LORD first. Love ya young man.

Andy's parents and sister are certainly a great blessing also! We love them in Mckinney!

Andy. You are doing so well…

Andy. You are doing so well. I’m proud of you and I’m not your Dad. Your article writings are outstanding. I pray for your family every night. Galatians verse is spot on. Just stick to it and don’t give up. You are part of a great family, a great blessing. Hoping to see you get your GM title soon. Your friend, David Rodriguez.