Friday’s penultimate round of the 2022 U.S. Junior, Girls’ Junior, and Senior Championships saw the Junior and Girls’ Junior frontrunners maintain solid leads, while the Senior was blown wide-open. 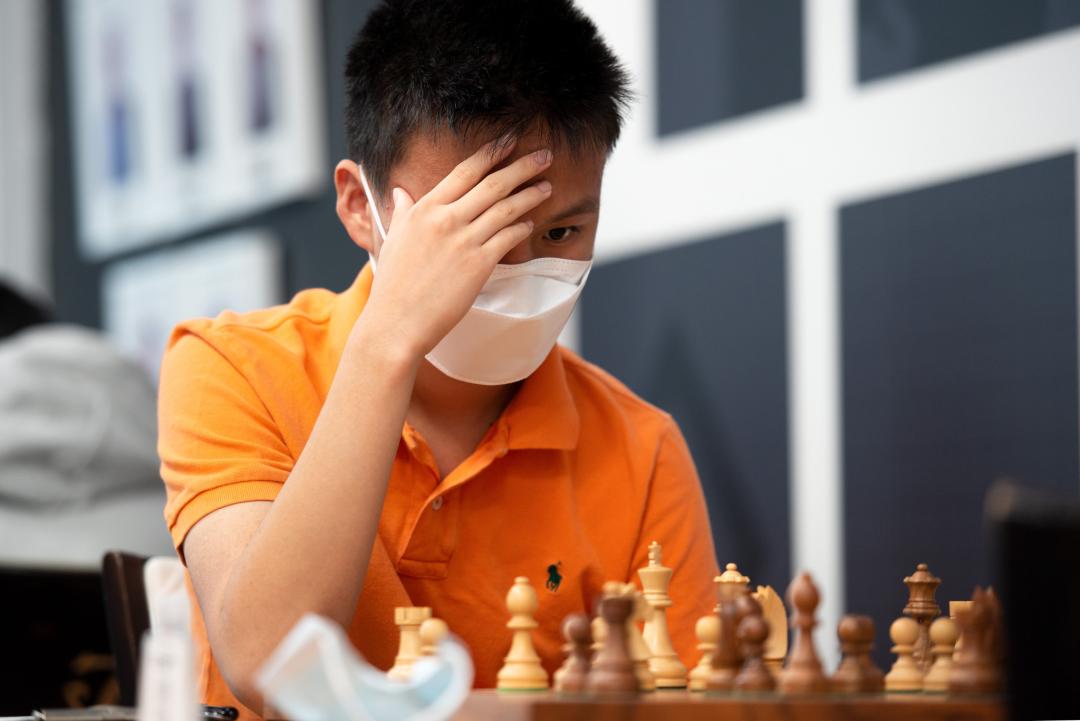 15-year-old GM Christopher Yoo bounced back from his loss in the previous round to score an important win against 13-year-old GM Abhimanyu Mishra:

In the post-game interview Yoo was “relieved,” admitting that after his tough loss in the previous round he “may have thrown a few pillows and screamed a few bad words” in frustration.

Hong remains a full point behind Yoo going into the final ninth round. He will take Black against tailender Pedro Espinosa, while Yoo will also have Black against winless IM Carissa Yip. With a draw or a win Yoo will guarantee himself first place, but if he loses and Hong wins then the two players will tie for first and contest a playoff. At stake is a qualification spot for next year’s edition of the highly prestigious (and lucrative) U.S. Championship.

Meanwhile GM-elect David Brodsky continued his strong comeback after a bad start to the tournament, and after a win against Espinosa is now sitting on a small net rating gain. He will have Black against Mishra in round nine, and with a draw he will finish the tournament on +3.5 FIDE rating points, which added to his current 2496 FIDE rating makes 2499.5, just barely rounding up to 2500 and fulfilling his final requirement to become a Grandmaster. 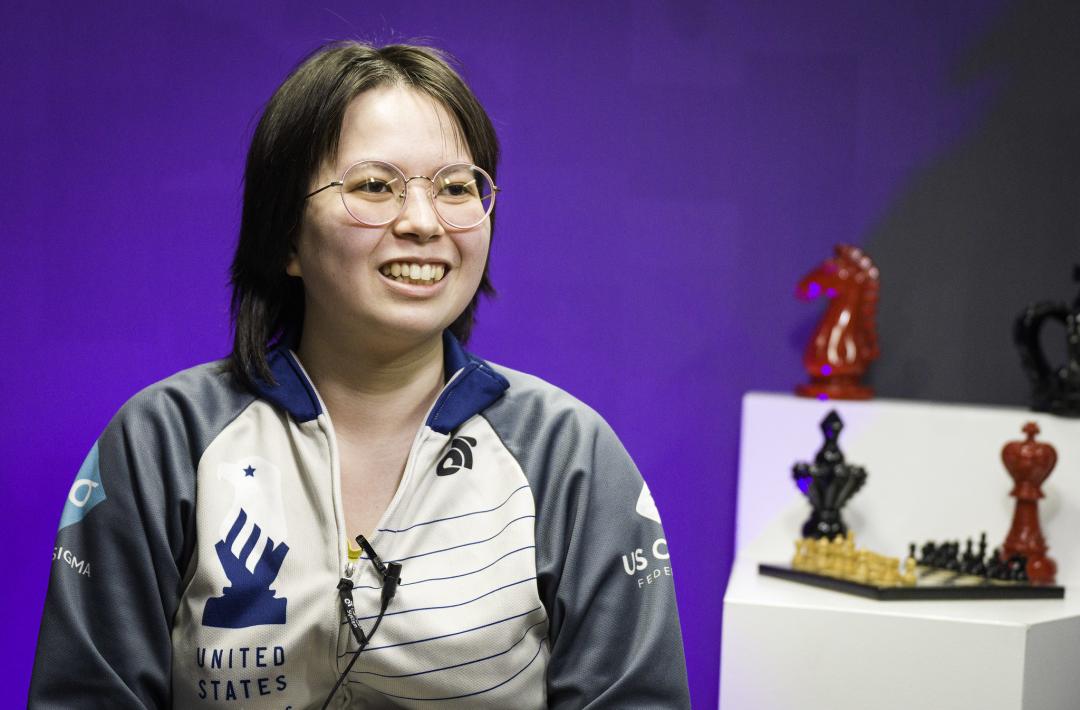 Like their counterpart in the Junior, leader WFM Sophie Morris-Suzuki also bounced back from a loss in round seven with a win on Friday, crushing fellow WFM Anne-Marie Velea. Morris-Suzuki also similarly admitted to being “definitely a little relieved” to have righted the ship. CLO editor John Hartmann provides brief notes to the game.

In Saturday’s ninth and final round, Cervantes will have White against Morris-Suzuki, needing to win to force a tiebreak playoff. Yu has Black against Velea and with a win can turn it into a three-way tiebreak playoff. Here too the stakes are high: the winner qualifies for next year’s U.S. Women’s Championship. (Full disclosure: I am rooting for Sophie, who as a young untitled player took some lessons with me at the Marshall Chess Club several years ago!) 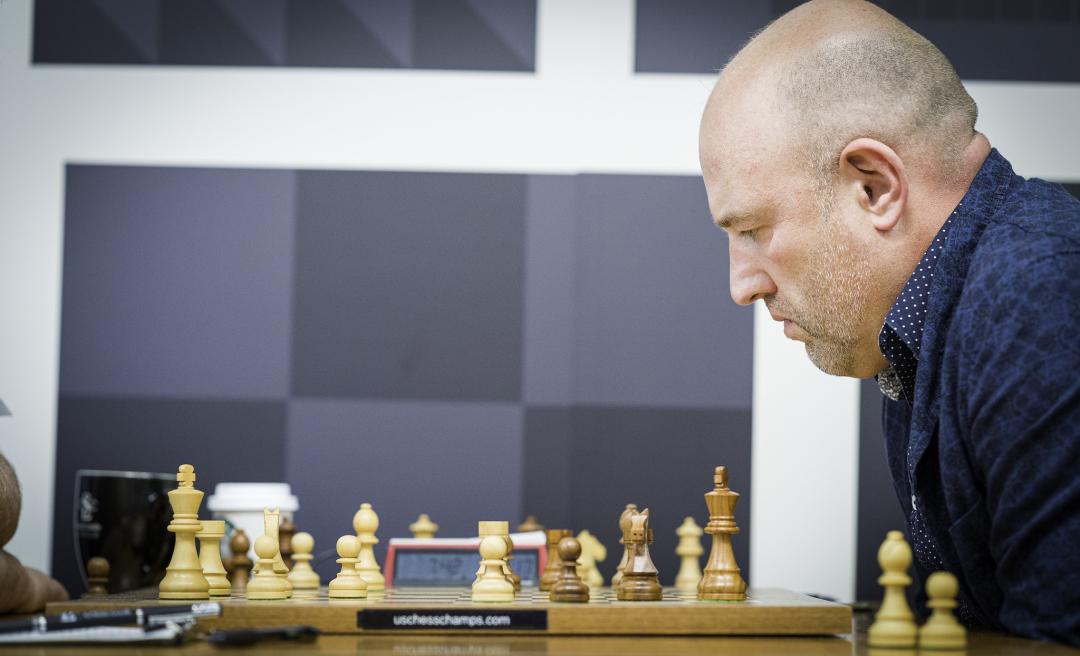 The Senior field was blown even more wide-open after narrow leader GM Larry Christiansen went down against GM Alexander Shabalov:

This allowed Shabalov to catch up to Christiansen’s score of 5/8, and three other chasers to do the same. GM Dmitry Gurevich benefited from a simple blunder by IM Igor Khmelnitsky, while GM Maxim Dlugy played a self-described “perfect game” against GM Igor Novikov, catching him with a batch of complicated opening preparation. Finally, GM Vladimir Akopian, who recently switched federations from Armenia to the USA, was up a pawn against GM Joel Benjamin but could not convert it into a win.

Akopian will have White in the final round against tailender GM Nick de Firmian and is favored to win both by rating and by current form in this tournament. This would incentivize further decisive results in the other two games among leaders.

Gurevich will have White in round nine against Christiansen, and in Friday’s post-game interview, he remarked “I enjoy playing Larry” due to the latter’s exciting style. Gurevich compared positional players like himself to attacking players like Christiansen with the analogy “regular player is like horse rider — attacking player is like bull rider!”

Meanwhile Shabalov will have White against Dlugy, who described this as a “good Black,” implying that Shabalov will be playing uncompromisingly for a win, even at the risk of increasing Black’s winning chances as well.

All eyes will be on Saturday's games in all three sections for all the marbles!

Congratulations to GM Yoo and to playoff winners GM Shabalov and WGM Yu !