After five years, 19 games, and a record-shattering 136 moves, we have a decisive result in a World Chess Championship game. 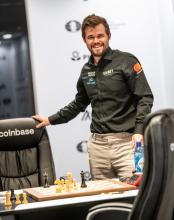 GM Magnus Carlsen defeated GM Ian Nepomniachtchi in the sixth game of the 2021 FIDE World Chess Championship. It was the longest game ever played at a World Championship — the former record was held by GMs Anatoly Karpov and Viktor Korchnoi for their 124 move draw in Baguio.

After a deceptively quiet opening, Nepomniachtchi dramatically sharpened things by forcing a trade of Carlsen’s queen for his two rooks, radically unbalancing the position. After some mutual errors just before the time control, the players settled in for what would be a very long game.

Carlsen surprised many commentators with his two f-pawn pushes on moves 59 and 60, but for the slight weakening of his king safety, he gained space and put continual pressure on Nepomniachtchi’s shattered pawns. Soon Carlsen gave back a rook for pawn and bishop, reaching a position only he could win. And the grind was on.

The tablebases thought that Black could hold with best play, but ‘best play’ and ‘moves made while your clock is ticking’ are two completely different things. After truly impressive defensive efforts, Nepomniachtchi’s final errors came on move 130. Soon he was extending his hand in resignation.

In a rather fortunate turn of events, today’s guest annotator is none other than World #8 and 2021 U.S. Champion GM Wesley So. Here’s what Wesley had to say about the game, along with his gargantuan set of notes to the game.

This was the longest World Championship game in history, I think, at least so far. The game lasted almost eight hours and it showed Magnus at his very best: using excellent endgame technique and being willing to keep playing basically forever. Making small improvements here and there, he was able to apply insurmountable pressure and force Nepo to run low on the clock.

This is a big blow for Ian, just as the match is nearing halftime, and especially considering that for most of the game Ian did not seem to have any problems whatsoever. Black's play was very good, but his laudable ambition to complicate the game, coupled with mutual mistakes and ever-increasing pressure led to a win for White. With eight more games left, Ian has to start making use of his White games and take advantage of the good positions he is getting in the Ruy Lopez.

You can directly download the .pgn with So's exclusive annotations here.

How do you find print out of…

How do you find print out of move by move of game 6 of the Carlsen victory yesterday?

Luc good question..So shows later the pawns are fatally weak after 36.,,e4 35 Nb2 white just exhanges off the queenside pawns and doubles both rooks on any pawn on the king side.It is all over. Jude Acers/ New Orleans

My goodness gracious thank you US Chess That is just what we need indeedie ..gargantuan notes from the chess champion of the United States MR. WESLEY SO on what is already considered one of the greatest games of all time. Others talk .. Mr. So delivers. Jude Acers/ New Orleans ps downloaded immediately also. Enjoy,,,readers may not have another seven seas chess experience like this in their entire lives.,650,000 people!!! were watching live when this round 6 world title ended.

CORRECTION ON GRANDMASTER SO…

CORRECTION ON GRANDMASTER SO SUPERB NOTES... it is understandable that while riding a 7 hour plus hurricane and seven chess seas..THE LONGEST WORLD TITLE GAME OF ALL TIME... the US Champion and everybody else missed 118,,,Qb6 ch! forcing 119Nd4 and preventing the king from advancing to the kingside... Grandmaster Giri / world top 20 player later pointed this out and considered 118...Qa5? a very serious error. He is correct. This is an emergency situation,.,,White ABSOLUTELY cannot be allowed what legendary Seattle former world junior chess champion famously called 'STUDENT BODY RIGHT!'..... Qb6 draws easily. iT IS FUN TO BE A MONDAY MORNING QUARTERBACK! 7 plus hours of epic chess that lasted over two days. As good as it gets. Wow! thanks for this great coverage.
Jude Acers/New Orleans