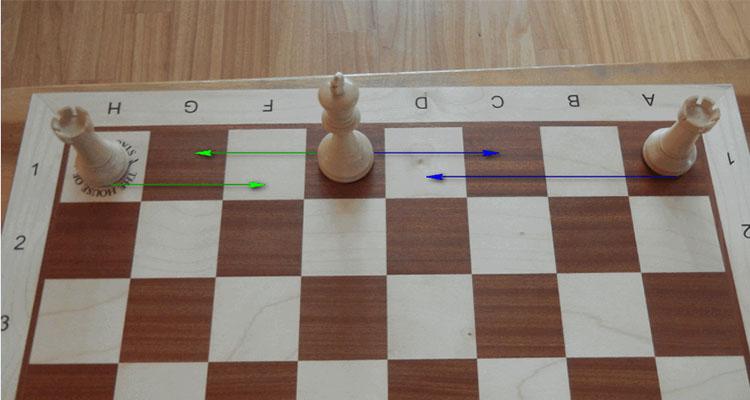 The castling move is a descendant of the "king's leap" in Medieval chess, when the king on its first move was allowed two squares in any direction, including like a knight, leaping over any man in its way. In medieval chess, the king was afforded these safer ventures, on account that the queen and bishop were weak pieces. The queen could move only one square diagonally and the bishop, even weaker, could only move exactly two squares diagonally - thus only able to reach a maximum 8 of the 64 total squares. (These two weak pieces still exist in traditional Chinese chess, which is still played by millions though China also now promotes our international chess.) 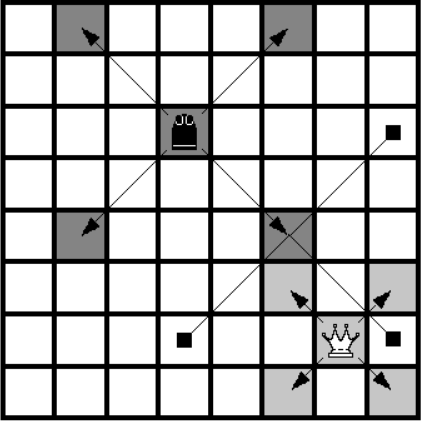 The queen and bishop assumed their more powerful modern moves around 1475, though the king's leap remained. With greater threats on the board, now the king sought safety in the corners, and some players used the king's leap for this purpose. They first moved the rook to f1, and later had the king leap over the rook to g1, in effect castling in two moves. The idea later became our modern one-move castling maneuver.

There had always been restrictions on the king's leap, varying among local regions, and some of these restrictions were applied to castling. Most agreed that the king could leap or castle only on its first move, and couldn't leap out of check. Some didn't allow the king to castle if previously checked, regardless of if it had moved or not. Others did not allow castling if the rook crossed an attacked square, while some argued the king should be allowed to castle through an attacked square.

At the beginning of the 19th century, two very different versions of castling existed in different areas. While the traditional rules of castling became prevalent, in parts of Italy and Germany a form of castling was allowed that gave the player freedom in choosing the placement of king and rook. In this "free castling,” the king could go as far as the corner square, and the rook could leap over it to as far as the king's square -- essentially a players’ choice as to which squares the king and rook would occupy. Naturally, the queenside provided even more variations of this method than the kingside, together totaling 16 unique ways to free castle for each player. Because of this greater number of castling variations, a rule was added that, in free castling, neither the king nor rook could attack a piece.

Needless to say, free castling wreaked havoc on opening theory, with each side having 16 possible castling moves – and its impact was felt. In 1800, influential author and lawyer Ercole del Rio observed that the Italian manner of free castling was richer in stratagems, and differed from the other method by being better for offensive designs rather than king safety.

But as chess literature became more abundant and worldwide competition more frequent, these differences in regional castling rules proved a roadblock in making chess a fully international game. There were attempts to satisfy both methods: In the 1840s, a two-game correspondence match between two German cities, Hamburg and Breslau, allowed free castling in one game, but used our modern castling rule in the other game – catering to the preferred method in each city. In the game with free castling, both sides castled the king to the b-file and the rook to the c-file. 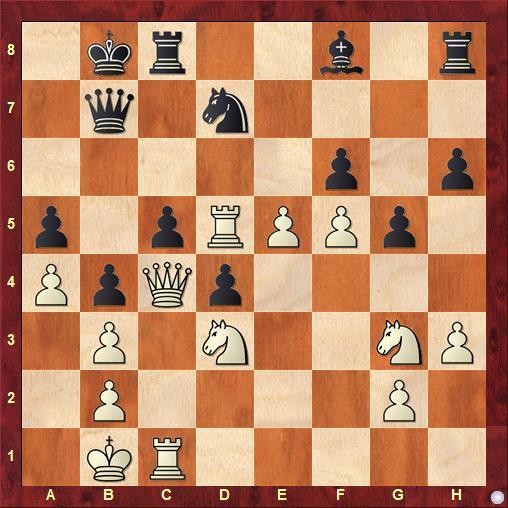 Image Caption
A position from an 1840 correspondence game played between the cities of Hamburg and Breslau, Germany. Both sides have free castled.

In the 1840s, Howard Staunton campaigned to eliminate the free-castling rule, as part of his efforts to standardize international laws and opening literature. As such, free castling began to disappear and ultimately became extinct, though there remained some awkward wording in the published rules that needed clarification.

Early rules stated that castling was possible with a rook that has not been moved. One particularly thorny published trick problem showed the White king on e1, with f1, g1, and h1 vacant, and a White pawn on a7. The "solution" was 1. a8 = R, followed by a castling move that switched the promoted rook from a8 to f1. The argument for this trick problem was that the promoted rook on a8 had not yet been moved so, according to the rules, it could be involved in the castling maneuver! Modern wording has taken care of this loophole, now specifying that the king moves along the same rank toward the rook, which is then transferred over the king. 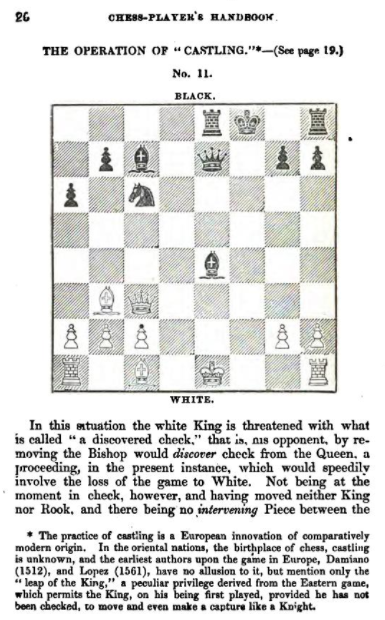 An additional issue remained, however: could castling be a legal move in a composed problem or study? Castling is not allowed if the king or rook have previously moved, even if they have returned to their starting squares. But composed positions show no preceding moves, so some argued that, if a White king and rook are shown on e1 and h1, castling is still possible because it is assumed they have not previously moved.

But some early composing tournaments barred castling in a solution, on the grounds that one could not assume preceding king or rook moves in hypothetical games. A compromise was accepted: castling in a composition was allowed, only if the composed position could have been reached in any legal game in which neither king nor rook was moved.

But even that convention left one quirk: Suppose the king and both its rooks are on their starting squares, presuming that either 0-0 or 0-0-0 is possible in the solution. But consider this set position: White to move, and Black with only the following: King on e8, rooks in each corner, and three pawns all on their starting squares. Such a position could have been reached only if the Black king or one of its rooks moved last. Thus, either (or neither) 0-0 or 0-0-0 might be legal, but not both. I am not aware of any accepted convention to determine which possibility would be allowed in that case!

The position in the final…

The position in the final paragraph, where black must have moved a king or rook for the position to be legal is interesting from a theoretical point of view, but is not a puzzle or problem of interest.

The real challenge is to create a chess problem that can be interesting, but in which it cannot be determined if a player may castle or not. Even better would be to have different solutions depending on which move is legal.

Google Translate translates the above as:

Medieval chess also allowed the queen, (which moved just one square diagonally), to have an initial 2-square leap analogous to that of the king's. This was allowed even for queens created by pawn promotion, on their first move after promotion. Of course, when the queen assumed its modern powers its "leap" disappeared, while the king's leap remained to evolve into castling.