Eric Schiller Dies at 63: "Will be Remembered for His Love of Chess" 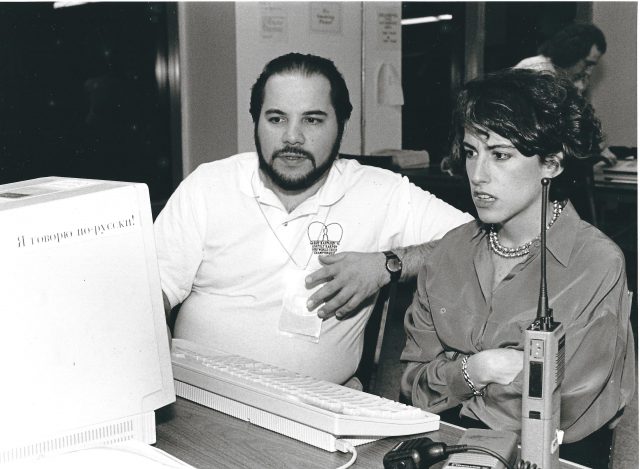 Eric Schiller will be remembered for his love of chess. He was involved in the game in many ways: as a player (FIDE Master), tournament director (International arbiter), organizer (over two dozen norms tournaments as well as the 1983 World Student Team Championship in Chicago and the 1998 US Open in Kona, Hawaii), prolific writer and teacher of thousands of kids. Eric was well-known for his generosity in helping others even in the last decade of his life when he struggled with serious health problems.

Hal Bogner, a close friend of Eric's, informed the chess community of Schiller's death. "I've lost one of my closest friends ever, of almost 40 years, and I'm sure many here share this loss with his mom and five sisters and brothers. I hope many anecdotes can be shared here, and we can celebrate his great spirit, which he maintained even in the years since his initial losses due to diabetes." 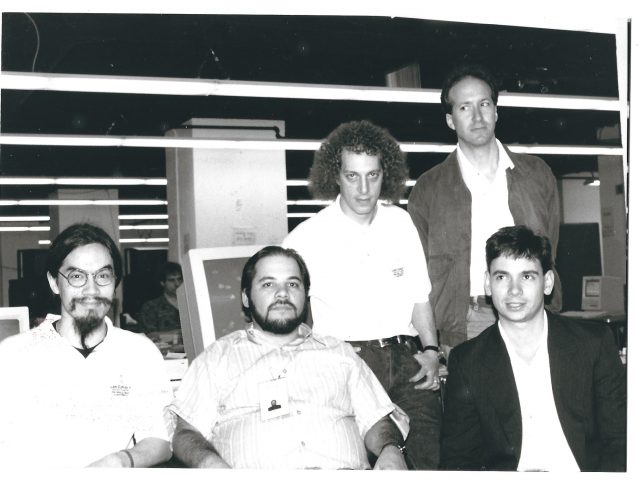 Left to right: Albert Chow, Schiller, Adam Black, Elliott Winslow, Billy Colias. Photo by Jerome Bibuld.
Hal Bogner also pointed out that as the World Championship begins this week, we can think back to Eric's contributions to World Championship history in London. He was press chief in 1986 and 1993 and arbiter in the 2000 match between Kramnik and Kasparov. 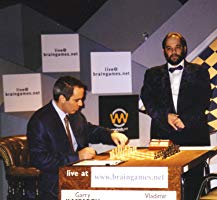 Eric's adventurous chess style is evident in this victory over International Master Jonathan Schroer. Eric, who was born on March 20, 1955, is survived by  his mother, Marlene and all of his five siblings, sisters Wendy, Mary and Elizabeth and brothers James and John. Among the remembrances on social media was National Master and musician Alex King, who will be expanding on his words for the January edition of Chess Life Magazine: "I will always remember his World Champion Openings (1997), which I bought at a scholastic national tournament in 1999 or 2000 and enjoyed and treasured for years. I think many chessplayers have had a similar guilty pleasure for his books at some point in their development. thanks to Schiller, who wasn't afraid to love big and fail big for chess." Please feel free to share your own memories as a comment.
SHARE:

I was really sorry to learn…

I was really sorry to learn recently of Eric's death. He wrote a book on my late godfather, Bill Colias, pictured above. Years ago, Eric took the time to share some great stories with me. It was a kind and comforting gesture.

I had the good fortune of…

I had the good fortune of meeting Mr. Eric Schiller in Chicago

doing a chess tournament. It is an honor to know i was bless to

have been in the presence of such a great loving spirit.

I remember Eric as a very…

I remember Eric as a very engaged and enthusiastic linguistics student many years ago (1980's), and searched online for him just now to see what he was up to. Very sorry to hear of his passing, but very glad to see the nice things he went on to do in the world of chess. I can understand his love of chess, but was there something about linguistics that led to him leaving the field? He had a lot of promise in that field as well!

I knew Eric during the early…

I knew Eric during the early 1980s. His books filled a gap in chess literature. He offered to publish a collection of my short stories in 1980 but I was never satisfied with them and, sorry to say, it didn't happen; purely my fault, and my loss. Eric's depth fascinated me. After one conversation I watched him walk off and thought of a Brave New World passage: "My mind was contained in his mind." Eric always taught me something in the friendliest possible way.

I have only discovered this…

I have only discovered this sad news recently and take some solace in paying my respects to this bright and generous spirit. I was fortunate enough to work with Eric during the 1986 World Chess Championship (WCC) in London, the 1990 WCC in New York, and the 1993 WCC in London.
Eric was a kind and gentle soul and we hit it off immediately. We both were technologically minded with a love of all types of music (though he would want me to mention his especial affinity for Jerry Garcia and the Grateful Dead.) We enjoyed a mutually affectionate obsession with Caissa.
At the time, my career in journalism was nascent and he introduced me to many players and journalists. 35 years later, many are still friends. We worked hard and played hard in three wonderful press rooms, detailed above.
It was he that introduced fax machines and Apple Macs at a time when the contemporary standard was Teeline and Telex. He always had time for other people and was truly empathic both in and out of a workplace in which we often covered for each other during 20 hour shifts.
We didn't grab a bite to eat after a tough day - we'd invariably take some of the staff out to a restaurant to unwind together. Eric made as much collective and communal as was possible. He suffered fools gladly (I should know!) preferring to support and assist rather than castigate and demean. I have said too much. All that I really needed to say is, goodbye my old friend, I will miss and never forget you.