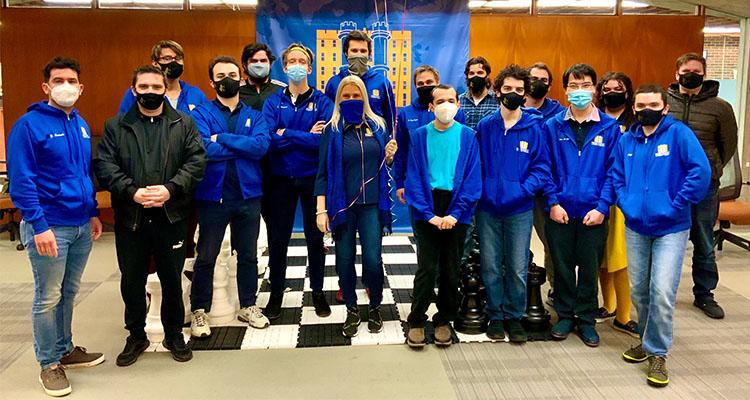 Webster University claimed clear first place with 8 points over 9 rounds in the first-ever virtual Pan-American Collegiate Team Championships. The Pan-Ams were played over Chess.com on January 4-6, with all participants being monitored for fair play through multiple cameras on Zoom.

Saint Louis University (SLU) took second with 7/9 and Webster’s B Team, the University of Texas Rio Grande Valley (UTRGV), and Texas Tech University tied for third, all with 6.5 points.

Webster jumped out to a 6-0 start and never relinquished their lead.

“The second day was the key, where we took a big lead through our crucial matches,” said Webster coach GM Susan Polgar.

On that day, Webster defeated the University of Missouri, followed by Texas Tech, and then SLU. Webster’s sole loss was to UTRGV in round seven. Polgar pointed to her team’s morale and spirit as a key advantage, in addition to dedication and preparation. Unlike most teams competing, everyone on the Webster team played at the same location.

Texas Tech coach GM Alex Onischuk, whose team won the Pan-Ams last year, thought the virtual format maintained the level of competition expected from the tournament in its normal format.

“Overall, it was a respectable tournament,” said Onischuk, who also serves as the chair of the US College Chess Committee. “But as always there was a lot of fight, not just in our matches, but also in other games. So I had a very good impression of the tournament, both as a coach, as well as someone involved in the organization."

“The nine rounds make it a fairer result in general, because we get to play all our rival teams,” Polgar said. “For the fairness of the event, I think that the more rounds, the more chances that the best team for that particular tournament will win.”

“That was really cool,” said top UC Berkeley player IM Joshua Sheng. “Some of the players there were thinking of going to chess schools – I know I had a scholarship with a chess school. I just thought it was kind of funny to be able to play against them.”

A win from either team would have earned a spot in the Final Four, but it wasn’t meant to be. Both teams lost to their higher-rated opponents, and the A-team finished seventh place on tiebreaks.

“There was no pressure, it was just playing for fun - maybe that’s why it worked,” Sheng said. 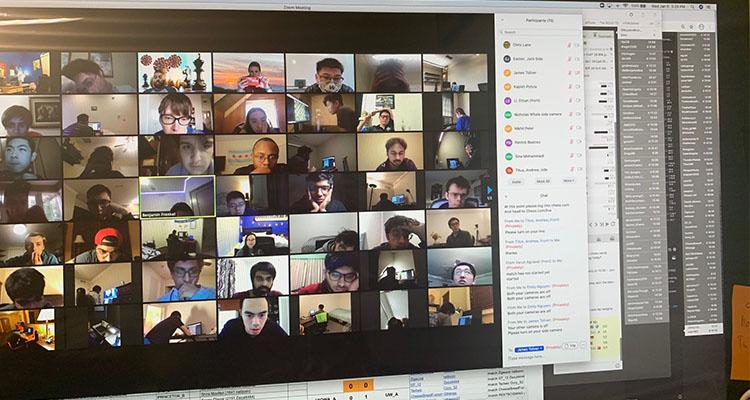 The tournament would not have been possible without the efforts of Judit Sztaray, the general manager of youth outreach and events at the Mechanics’ Institute, which hosted the event. The Pan-Ams were originally planned to be hosted in-person at the University of Toronto in late December 2020, though cancelled in August due to the COVID-19 pandemic. The Mechanics’ Institute was selected by US Chess in October to host the virtual event.

“I know that college students don’t have an opportunity to compete just amongst themselves too often, so I felt it was even more important to provide this opportunity,” Sztaray said.

“The team that we assembled was hands-down the best ever team that I worked with,” Sztaray said. “We found the best person for every role. I knew all of these people, but I rarely get to work with them. Because it was online, I could really take the best team in the country. I wasn’t confined to California.”

Onischuk, in his role as the college chess committee chair, said he felt optimistic about the future of college chess and thought that online tournaments would now become part of the collegiate gamut.

“I think we’re going to keep several tournaments online,” said Onischuk. “As we know, not all clubs can afford to go to tournaments. If we have tournaments online, it will give more opportunities for such clubs to grow and develop and to stay motivated as well.”

Last spring, the 2020 Final Four tournament was cancelled as the pandemic took its toll.

“Winning the (2020) Pan-American 6-0, we were very optimistic about the Final Four,” said Onischuk. “It was very disappointing to everyone, to all four schools, that we had to cancel the tournament. If it had happened today, we would have just played an online tournament. To switch like that in two months from in-person like that, we were not mentally ready.”

This year, the Final Four event will likely be held virtually between the top Pan-Am finishers Webster, SLU, UTRGV and Texas Tech.

“We definitely anticipate a tough fight as usual,” Polgar said. “They are obviously all strong teams with great coaches as well. We expect a tough fight, and it will come down to largely the nerves and some luck along the way. We have started preparing, and we look forward to the battle.”

Does Webster U. compete…

Does Webster U. compete against universities that do not give any chess scholarships? Thanks.