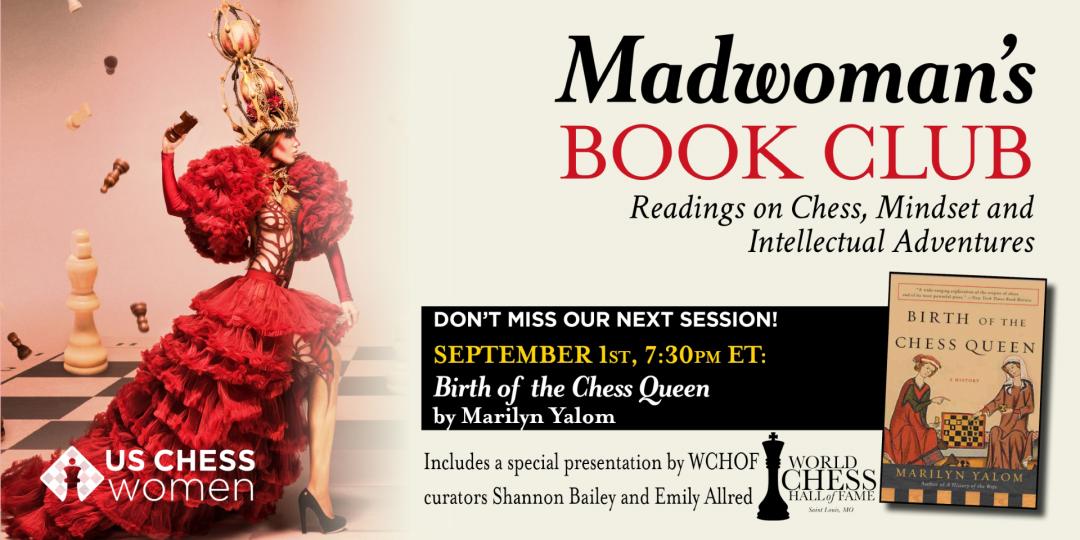 Welcome to the Madwoman's book club, as featured in the New York Times and Vanity Fair.

This thinking woman's book club will provide a forum for adult women (18+) to socialize over a book related to chess or intellectual discovery. No technical chess knowledge required.

The club name is inspired by the history of the chess queen, once the weakest piece on the board. Around 1500, she became the powerhouse we know now. That game was at first derided as "the madwoman's chess game", but now it is just known as chess.

Our first session covered the book that was adapted into a hit Netflix Series, the Queen's Gambit by Walter Tevis.

Our next session is on September 1 (rescheduled!) when we'll discuss The Birth of the Chess Queen by Marilyn Yalom. This session is a collaboration with the World Chess Hall of Fame. Sign up using this google form: https://forms.gle/QnmFwoPMJxTPLz5o9

Sign up for the general club list to get call in credentials and future updates here: https://forms.gle/mJoo3HdwCyDFnKzp7. You can also watch highlights from previous sessions now on our Madwoman YouTube Playlist.

May 21: The Disordered Cosmos by Dr. Chanda Prescod-Weinstein

January 22: Mind and Matter: A Life in Math and Football by John Urschel and Louisa Thomas, featuring guests Urschel and Thomas