Jennifer Vallens is a chess parent, player, teacher — and a tireless advocate for our game. Her mission, she says, is “to help bring chess to the masses.” Over a decade ago, the multi-talented Jen founded OFF da ROOK as a newsletter resource for chess parents and kids, which led to her earning her coaching certificate and running scholastic tournaments. She’s written several articles for US Chess, including a cover story for Chess Life on the challenges of chess parenting [December 2018], and she sits on the board of the Chess Journalists of America. She’s also organized diverse projects with GM Timur Gareyev that range from a UCLA study of Timur’s brain, to his breaking the Guinness World Record for blindfold chess, to our award-winning Chess Life skydiving cover. Here is her story.

FROM NEWBIE TO ADVOCATE

“I was 40 when my six-year-old son to taught me to play. I was instantly hooked! I wanted to know what kept these kids so engaged, so I started sitting in on my son’s lessons and watching him play in tournaments. I learned that chess is COOL. And you don't have to be really smart to play chess. In fact, the opposite is true — playing chess actually makes you smarter. Whether you are four or 84, you CAN learn to play. Over the next 10 years, I built a career around my love for the game and the chess community. I started a local chess newsletter called OFF da ROOK that eventually morphed into OFF da ROOK Entertainment after I started running my own scholastic tournaments and organizing worldwide events for GM Timur Gareyev.” 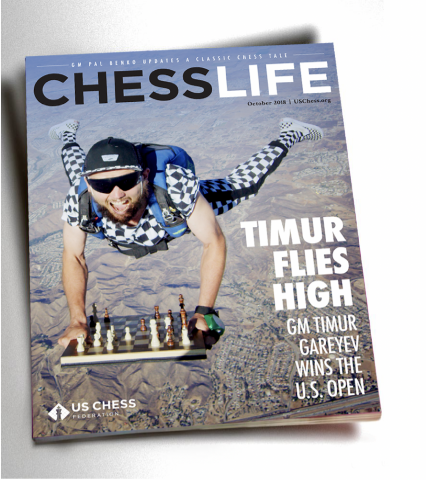 THE COVER SHOOT OF THE CENTURY

“I got a call from Dan Lucas [US Chess Senior Director of Strategic Communication] after Timur won the U.S. Open [in 2018]. Chess Life wanted a cover of Timur doing something other than chess. Because Timur is such an adventurer we tossed around some ideas — maybe hiking or something similar — but then I thought, ‘He skydives!’ So I came up with the idea of him skydiving while playing chess. I had actually seen a photo of two people playing chess while skydiving — they had been photoshopped in — and that was in my mind. I knew where Timur had skydived before and luckily reached Joe Jennings, who is a big-budget cinematographer who’s done skydiving video footage for movies like Charlie’s Angels and Point Break. He was interested in Timur’s story and offered to do it at huge discount because he loved the project. And that’s how it happened.”

OFF THE BOARD IMPACTS

“There are so many ways chess crosses over into daily life. For one, playing chess requires patience. You have to stop and pause and think through your actions and the possible consequences of your actions before making a move. This is a huge life skill. Another valuable skill is learning how to be flexible. In a chess game, you need to have a plan. But as in life, unexpected moves get thrown at you. Playing chess helps build resilience.

“My story is a perfect example of how US Chess helps enrich lives through chess. If you are playing in rated tournaments, there is no question of the value and necessity to join US Chess. But even as a casual player, US Chess offers so many resources that help build the community and make chess accessible to all.”