Junior Events Put the Spunk in the US Open 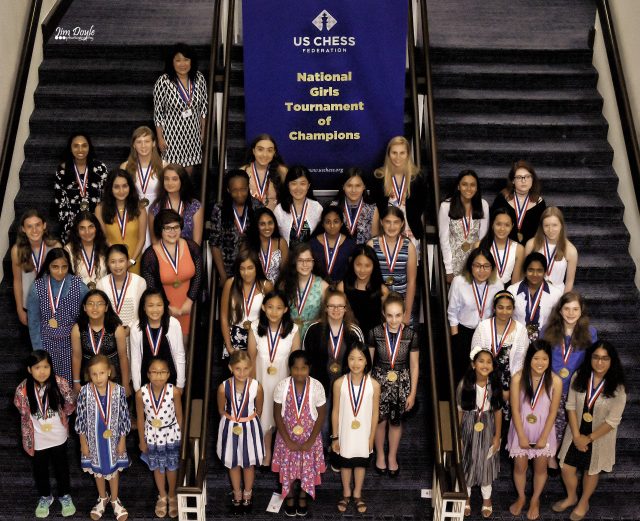 In the old days, the kickoff of the U.S. Open Chess Championship was, let’s say, a bit sleepy. Sure, there were grandmasters to ogle. But any boiling up of excitement was slow to percolate, after quite a stretch of the nightly 7 p.m. rounds. And the spectators at the brief welcoming ceremonies of old were the players themselves. It was a sort of opening selfie. 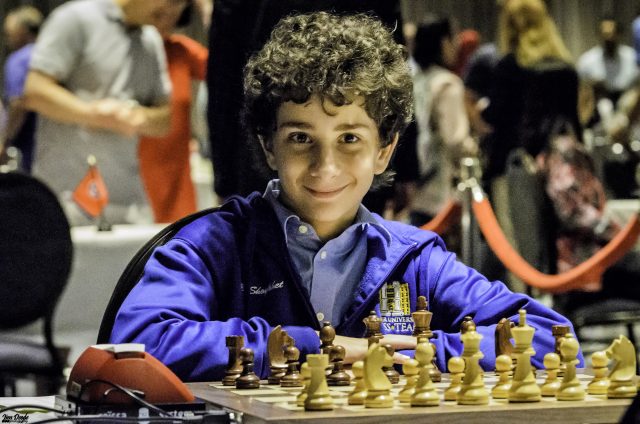 Benjamin Shoykhet of Missouri
Nowadays the U.S. Open commences with gusto, thanks to the bubbling enthusiasm brought to it by the annual junior championships—the National Girls Tournament of Champions, the Barber Tournament of Junior High Champions, and the Arnold Denker Tournament of High School Champions. On Saturday at 3 p.m. this year at the Sheraton Norfolk Waterside Hotel, approximately 500 parents and players settled in for an entertaining commencement that focused on honoring the players—48 in the Denker, 48 in the Barber, and 42 in the NGTOC—all chosen by their states to compete. 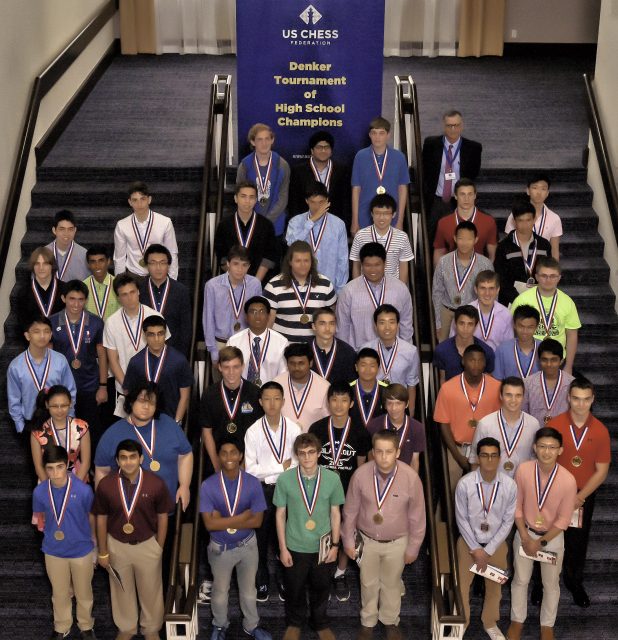 Stephen Shutt and Dewain Barber emceed the commencement that began with the traditional “Parade of Champions.” US Chess National Tournament Organizer Franc Guadalupe gave the featured address. All three exhorted the young champs to “Pay It Forward” by teaching the game to others. https://twitter.com/USChess/status/891380668235730944 Barber, a career teacher and lifelong scholastic chess booster, is the real chess medic who injected junior championships into the U.S. Open, the longest-running chess championship in America, this year marking its 118th. 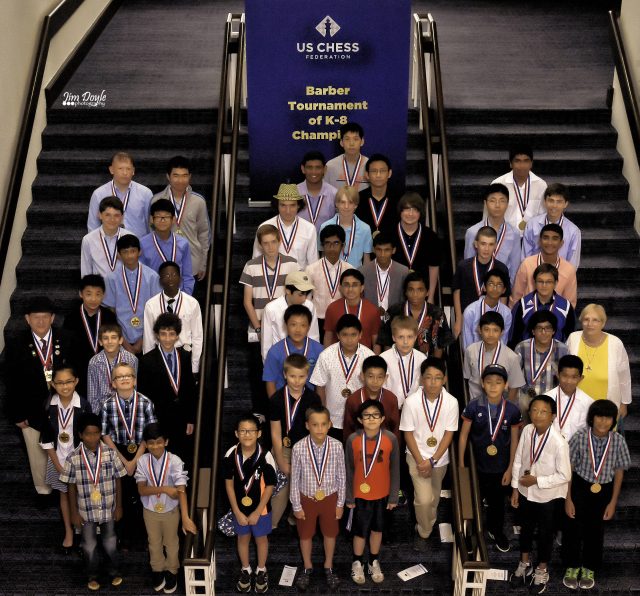 To be sure, the modern U.S. Open offers its own excitement—and lots of options. Players can choose a stately nine-round, one-game-per-night schedule, or play the same nine rounds in six days. Those frantically time-pressed can even play all the rounds in four days. The three schedules merge for the final three nightly rounds. The Open is just that—no separate sections here. You can sit down to play a master or a muddler, depending on your score. Those who can’t get enough chess or don’t have time for the main event can choose Bughouse, Blitz, a Weekend Swiss, a Scholastic and Quads. 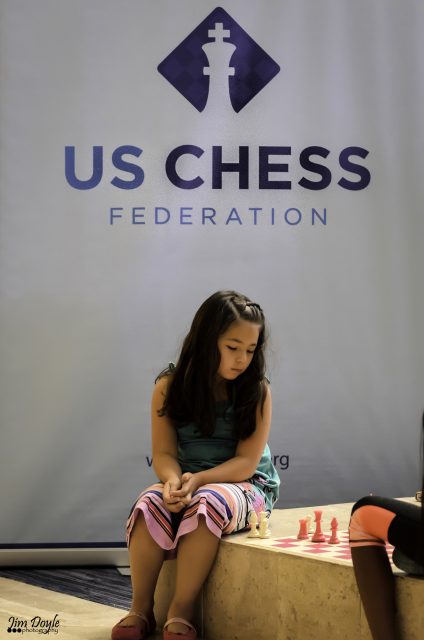 Skittles between games
The nine-day pack of 131 contestants features half a dozen grandmasters, led on Board 1 by 2017 U.S. Championship contender Yaro Zherebukh. He has lots more GM competition to come as the shorter schedules begin, the six-day on Tuesday and the four-round on Thursday. The final group will swell to more than 300. The junior champs do play separately but at one end of the same roomy and elegant ballroom. And when the juniors wrap up their six-round events on Tuesday, they are welcome to enter the US Open. 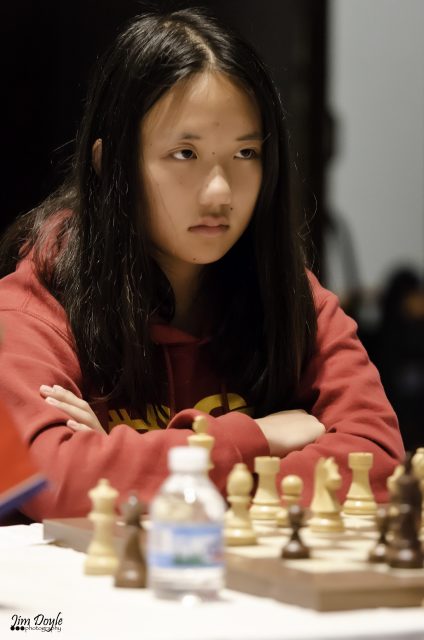 NGTOC top seed Annie Wang
Annie Wang, Justin Wang, and Advait Patel began at the top of the NGTOC, Barber, and Denker, respectively—all masters and top seeds. They claimed their roped-off seats on Board 1. That’s an honor. But with champions from every state gunning to take their spots, there is pressure too. Back in the rating pack, there’s plenty of pride. After all, all the players were selected by their home state. Nika Arnold, Indiana’s poised representative in the NGTOC for the fourth year in a row is a B-player. She’s the top female in her state but all too aware of the top guns here. “I just try to play my best, maybe gain some rating points, and even score an upset if I can.” Although early arrivals at the Sheraton faced some heavy rains and a soggy check-in, Sunday has brought a sunshiny day in the 70s. The new waterside walk along the Sheraton, visible from the hotel’s City Dock restaurant and stretching down to other diversions, beckons players junior or senior to relax and stretch out a bit before the next round of stationary combat. Its appeal pulls even journalists away from their keyboards. 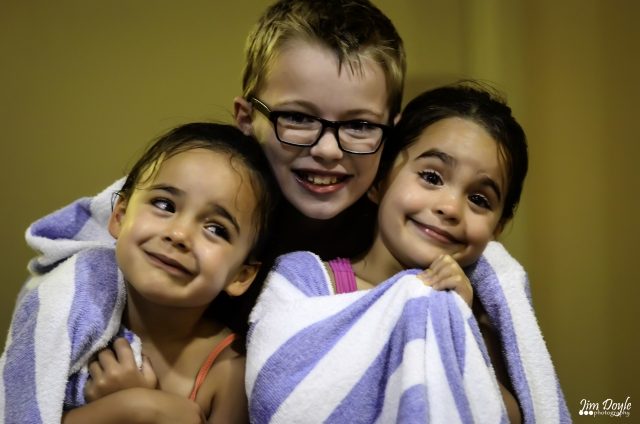 Fun times away from the board
Find results and pairings here and live games of top boards from the US Open and the Denker, Barber and NGTOC here. Follow our twitter @USChess for updates from Vanessa Sun and look for more photos by Jim Doyle on Facebook.  https://twitter.com/USChess/status/891465436646322176
SHARE: