Arriving at my convivial hotel in Lviv, a video was running on the screen behind reception, the Ukrainian version of [youtube If I hadn't yet realised that chess fever had hit Lviv, 5 minutes after check in, there came a knock on the door. Housekeeping had realised something was missing in my room and delivered an ornate chess set. (Towels would have been useful as well and arrived a little later; priorities are important.) The hotel had no way of knowing that I had come to cover the Women's World Championship match – it's just one of those little luxuries you can expect at a $35 per night, four star hotel in Lviv. 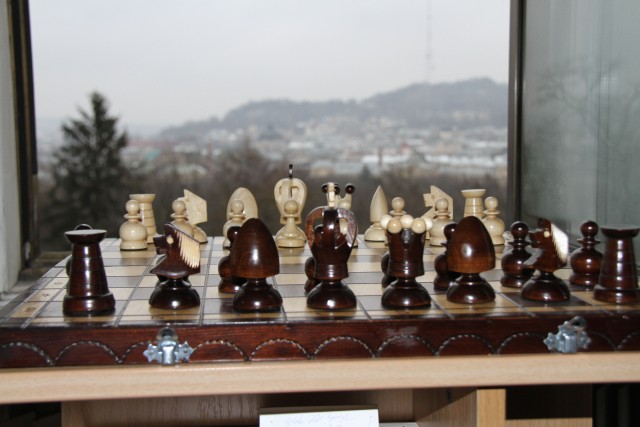 Photo Cathy Rogers
As became clear in speech after speech at the lavish opening ceremony on March 1, chess has a long tradition in the Ukraine, and in the western city of Lviv in particular. (When starting out on the tournament circuit in the 1980s, I heard stories of a legendary apartment block in Lviv populated by more Grandmasters than in the whole of Asia at the time.) The Women's World Championship match coming to Lviv was apparently an idea of the Ukrainian President Petro Poroshenko. When Mariya Muzychuk won the FIDE Knock-out Women's World Championship title in 2015, she was presented with a medal from the President, who learned that Muzychuk would have to defend her title the following year. Poroshenko opined that the Ukraine should host the match and, disregarding a possible offer from China, FIDE declared that the 10 game contest was to be held in Muzychuk's home town. 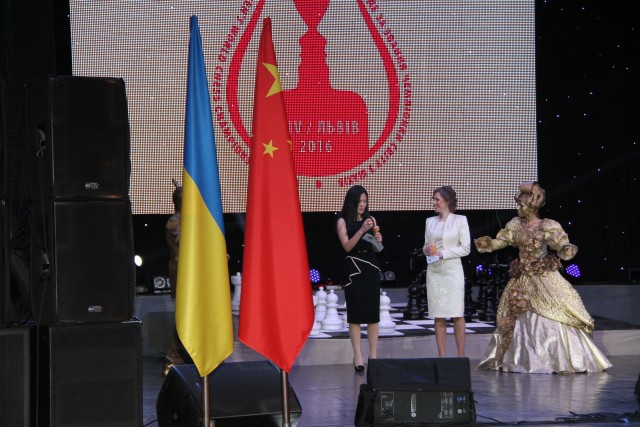 Opening Ceremony, Photo Cathy Rogers
So it was that on Tuesday night, 1,000 of the great and good came to the 120-year-old Lviv Opera House to witness the opening of the Women's World Championship match between Muzychuk and the highest rated woman player in the world, Hou Yifan. Media were present in force; the crazed scenes at the impromptu photo shoot before the official ceremony began saw photographers and cameramen aggressively jostling for their shots, something that I had not seen at a chess event since the 2013 world title match in Chennai. At 7pm the opening ceremony began, with the players' national anthems followed by dancers performing what appeared to be a Ukrainian version of the haka performed by the Zhyttya Ballet. (The Zhytta Ballet were the stars of the opening ceremony, with their Danish Jedi dance having to be seen to be believed.) Musical acts ranged from three tenors, Tenors Bel'canto, to Voice of Ukraine finalist Khrystyna"> Soloviy, to a flamboyant violinist Olexandr Bozhyk who presented the audience with his own Mini-me (actually his precocious son) and later managed to play three violins simultaneously. 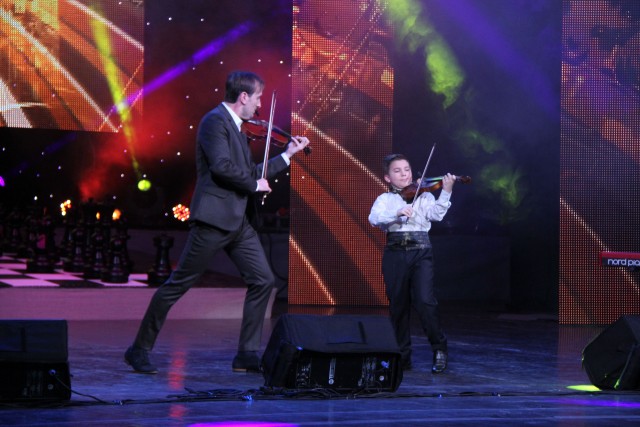 Photo Cathy Rogers
Speeches by local chess and city officials, all men, were notably political (which perhaps explained why almost none were translated into Chinese or English). The fact that Ukraine was at war with the Russian Federation was noted and many speeches ended with the phrase “Glory to Ukraine!”, which generated a response from the crowd “Glory to the Heroes!”.  (Those heroes were not, as I had initially assumed, soldiers who had died at the war front in the east of Ukraine but protesters who died at the Maidan demonstrations two years ago which overthrew the previous pro-Russian government.) Though Lviv is far from the disputed regions of Ukraine, it is impossible to forget the war when walking around the centre of Lviv, from the wreaths for the soldiers to the Putin toilet paper on sale at every second market stall. Though the speeches may have been imbued with nationalist fervour, it was notable that little distinction was made between Hou and Muzychuk, even though FIDE regards Hou as the challenger for the title Muzychuk won in the KO Championship. (Hou did not compete in the long-delayed KO Championship due to prior commitments in Hawaii.) Certainly Muzychuk was thanked for being the reason a world title match had come to Ukraine but the two players were treated as equals. 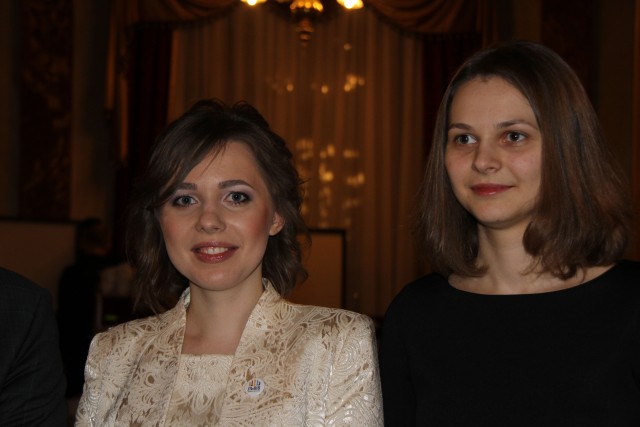 The Muzychuks, Photo Cathy Rogers
The opening ceremony concluded with the drawing of colours by the two players from carved wooden Ukrainian Easter eggs – Hou chose Black - after which the players and officials adjourned to a banquet elsewhere in the opera house. Muzychuk spent half an hour of posing for photos with anyone who was anyone in Lviv (usually with her sister Anna by her side) while Hou was able to quietly eat and chat with her mother. 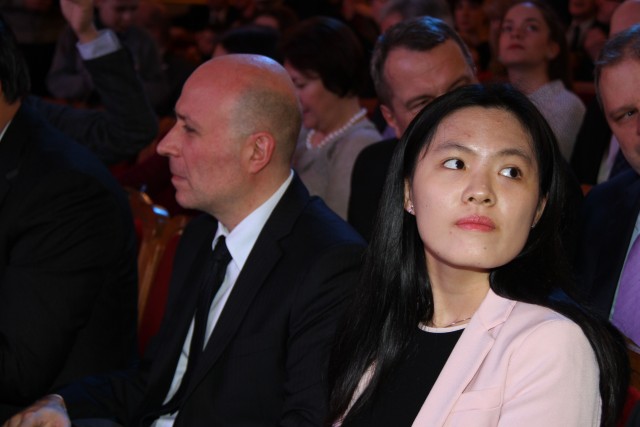 Trainer and GM Vladimir Cuchelov with GM Hou Yifan at the opening ceremony
** Head to Head Grandmaster Hou Yifan Age: 22 Rating: 2667 Ranking: #1 Nationality: Chinese Seconds: Chuchelov, Ye Jiangchuan, Yu Shaoteng Match experience: 2011 defeated Koneru 5.5-2.5, 2013 defeated Navara 4-3,  defeated Ushenina 5.5-1.5 (Also won non-classical matches against Negi and Najer in 2015) Results v Muzychuk: Classical 2.5-0.5, Blitz 1.5-0.5 Playing style: Universal, though tactical awareness can go missing. Grandmaster Mariya Muzychuk Age: 23 Rating: 2563 Ranking: #4 Nationality: Ukrainian Seconds: Eljanov, Naiditsch, every GM in Lviv:) Match experience: Nil Results v Hou: Classical 0.5-2.5, Blitz 0.5-1.5 Playing style: Opportunistic, though becoming more solid since the KO world title win. How and where to watch the match The official web site, http://lviv2016.fide.com/ , will broadcast the games with commentary by laid-back Lviv GM Adrian Mikhalchishin and guests, including Icelandic GM Margeir Petursson, who runs a bank in Lviv. Games with computer analysis may also be watched via traditional rebroadcasters such as, Chess24.com and ChessBomb. The game broadcast will be delayed for half an hour, as an anti-cheating measure. FIDE has been reluctant to implement broadcast delays (which are hated by broadcasters, sponsors and fans alike) but the possibility of undetectable radio receivers is becoming worrying. Anti-cheating measures were the main point of contention between the Chinese team and the organisers, though it appeared to be more a misunderstanding about the measures to be implemented. (A number of security measures had been agreed between FIDE and the Chinese but were inexplicably not included in the players' contracts.) In the end, scanners, mobile phone blockers and transmission delays were all imposed. A Chinese security guard patrols the access area to the playing room and photographers have been requested to hold back sending their pictures of the start of the game until half an hour has passed. Schedule Game 1  March 2  Muzychuk(W) v Hou(B) All games commence at 15.00 Lviv time, which is 8.00am New York time – though you will need to add half an hour for broadcast delay Game 2  March 3 Game 3  March 5 Game 4  March 6 Game 5  March 8 (the players change colours here, Hou having consecutive games with White) Game 6  March 9 Game 7  March 11 Game 8  March 12 Game 9  March 14 Game 10  March 16 Tiebreaks (if needed)  March 18 All games will be played in a small room without spectators at the Potocki Palace, at the edge of the city centre in Lviv. The palace's walls are hung with valuable paintings, though the painting directly above the board in the playing hall had to be changed due to excessive nudity, replaced by a still life. The time limit is 40 moves in 90 minutes, plus 30 seconds per move increment, with a 30 minute bonus at move 40. Follow along at http://lviv2016.fide.com/
SHARE: