Dr. Dale A. Brandreth, renowned publisher, editor, collector and author of chess books, passed away on September 9, 2019, in Hockessin, Delaware. He was 87 years old. 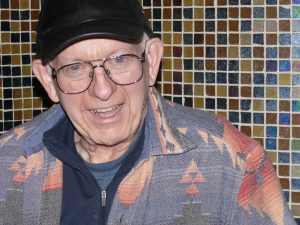 Dale Brandreth (photo Pete Tamburro)
Dale’s chosen professional career was chemical engineering. He worked for Dupont, and taught at Drexel U. and Widener U. But his efforts in chess publishing were prodigious. His start-up business was the famous Caissa Editions. Many of his works were known as the “red book” series because these quality hardcovers had that distinctive color. Among the “red books” were the World’s Greatest Chess Tournament Series (e.g., Karlsbad 1907, St. Petersburg 1914, Baden-Baden 1925, San Remo 1930, Bled 1931, Moscow 1935, Moscow 1936, AVRO 1938, to name just the ones on my shelf) and The Great Masters Series (Schlechter, Nezhmetdinov, Morphy, among the subjects). He used original sources from newspaper columns and magazines, translations (several by Jimmy Adams) and even hand-written documents. Publishing hard to find, if not impossible, tournaments was also a passion. Dale also did “minor” publications and pamphlets on everything from collecting books and sets to how to run a successful tournament. His work, The Unknown Capablanca, in concert with David Hooper for R.H.M. Publishing in 1973, is considered a gem by Capablanca lovers, of which Dale was very much one. He was a perfectionist. He always wanted to find just one more resource to make everything complete. We have an unfinished project because of that, but that’s another story. Over the years, I used to visit him at his Delaware “chess home,” which was separate from his family digs (a la Lothar Schmid). The house was filled with chess books on shelves, in the garage, in his huge workroom, and in any other room deemed appropriate. He knew where everything was! Our conversations were more like tutorials. The depth of his knowledge of chess history was immense. I am so grateful for all that he taught me over the decades. He had customers from all over the world. He not only sold his own publications, but the thousands of used and rare books of chess days past. Since he enjoyed chatting about chess so much, his customers also became his friends, and, later, some became the authors he used for his publications. The outpouring of sentiment about Dale on Facebook all points to his persona as a gentleman, a man who believed in fairness and a fine person to call a friend or business associate. Chess history owes a tremendous debt of gratitude to this man for his devotion to preserving our noble game’s history. Dale is survived by his wife, Alice, two daughters and five grandchildren and a sister. For another account of Brandreth's life and accomplishments, please read John Hilbert's appreciation posted at Olimpiu Urcan's webpage. https://twitter.com/olimpiuurcan/status/1171783671059111937
SHARE:

Both obits are excellent and really compliment each other. Anyone interested in American (and world) chess history and chess book collecting should read them both.
Condolences to Dale's family and friends. As an amateur chess book collector, very much appreciated his insights and helpfulness.
I used to purchase books to him from Madrid, Spain. I really admired him and every time I received a book or even his catalogue, he made my day! R.I.P Dale Brandreth
Dale and I knew each other for a long time. He knew my passion then was Em. Lasker and he could come up with some of the most interesting off the wall pieces. I also bought and sold his Caissa Editions books and loved doing so. His publishing methods and mine differed somewhat from each other except for two times when he and I both published books on/by Nezhmetdinov and Salo Flohr. Never understood the congruency of that. I tried to buy some Morphy letters from him with no success as I had a ready customer for them. His lists were often detail, thereby indicating another book collection purchase he had made. My company did beat him out a few times and one was the William Martz collection which was heavy into tournament bulletins. Dale knew more of the super collectors than I did. We traded some Chessplayer books (by Gillam) for my "coin" featuring Paul Morphy. I think that was out only ever bone of contention. I am amazed at his picture, he looked almost identical to my Father Jack! I'' miss him greatly. He knew so much more than I did but his job provided him with more funds then I had him RIP Dale..
A correction to my article: Dale's Capablanca book was published in 1975. E. Winter made me aware of this.