Calling all Kids: Be Part of a World Record Attempt! 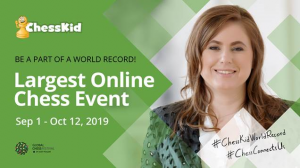 The world's largest chess website for children will team with the greatest female chess player ever in an attempt to set an official Guinness world record for world's largest chess tournament, ChessKid announced today. GM Judit Polgar, the strongest woman to ever play the game of chess, joins ChessKid in the record attempt, which will run from September 1 through October 5. Polgar will lead the ChessKid club that will organize the tournament. 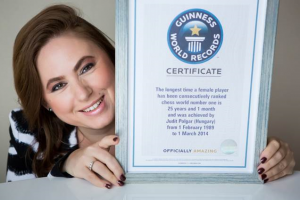 All kids with a ChessKid account are invited to compete in the tournament and participate in the world record. To join the record-attempting tournament, go to https://www.chesskid.com/register/kid/club/ckpolgar-world-record-club. To set the record, ChessKid needs more than 20,000 individual children to compete in the tournament, said Mike Klein, the site's chief chess officer. The tournament will have two stages. The qualifying stage will begin on September 1 and run through October 5, and will constitute the record-setting attempt for largest chess tournament with 144 qualifiers.  There will be four last-chance "super-qualifiers" on the day of Polgar's Global Chess Festival, which is October 12. All kids qualifying from one of these 144 qualifiers will then play a final on October 19 at 8 a.m. Pacific time. Any child who completes a single qualifier (all five rounds) will be counted toward the world record and will receive a special certificate from ChessKid signed by Judit Polgar. Participation in the finals is not required to count as part of the record. As further incentive to play, ChessKid will randomly select one kid per qualifier (144 total) to receive one free year of ChessKid gold membership. Participants must play all six games of the qualifier to be eligible. Five kids will be chosen at random to receive a signed copy of Judit Polgar's book, How I Beat Fischer's Record, and one lucky ChessKid will be randomly selected for a private lesson online with Polgar. The top five finishers in the finals will also all receive a signed copy of the book, and will each get to play one blitz game against Polgar and one against Klein. The winner of the overall finals will also get one free online chess lesson with Polgar. More prizes will be added later by local organizers and sponsors. ChessKid will use all of its normal fair-play protection measures to ensure that games are played under the site's guidelines.  Any child that is found to have used outside assistance or violated other policies will not be eligible for qualifying to the finals or any other prizes, and will also not have their participation count toward the record. All decisions made by ChessKid on fair-play cases are final. By participating in the tournament, players agree they have their parent or guardian's permission to play. To join the world's largest chess tournament and set the Guinness world record, join the Chesskid club at https://www.chesskid.com/register/kid/club/ckpolgar-world-record-club. Players must join the club to register for a qualifier. ChessKid is the world's largest website for children to learn and play. ChessKid.com is specifically designed to be a safe and fun place for kids, while providing resources for parents and coaches. Judit Polgar is universally considered the strongest female chess player of all time. A chess prodigy, Polgar earned the grandmaster title at age 14. She is the only woman in the history of chess to surpass the 2700 rating threshold and to qualify for a world championship tournament. Polgar is also an accomplished author, chess coach and ambassador of the game. For more information, contact: Mike Klein, Chief Chess Officer, ChessKid.com mike@chesskid.com
SHARE:

wHAT'S THE AGE RANGE?
According to Mike Klein at ChessKid.com, 18 and under.
Is 'six' rounds a typo. I played in a qualifier and it was only five rounds.
From Mike Klein: "We did indeed reduce each event from 6 rounds to 5 (if a child doesn't finish an event, Guinness may not count that child, hence the shortening). So this user is "all good"." I have edited the post to reflect this new information.
[…] You can also see Yip in action in this video where she takes part in the chesskid.com World record attempt. […]
Can kids still sign up ? or was September 1 the cutoff for pairings?
What constitutes as qualifying for the finals. I got first place in one, but do the top three people qualify?